PS: The Colonel still hasn’t called, and today made three days. Miss Lana says not to worry, that she will handle it. I’m worried anyway. Where is he? Why would he leave us when there’s a killer on the prowl? He has to have a good reason, but what reason trumps keeping us safe? If you see him, please ask him to call home. 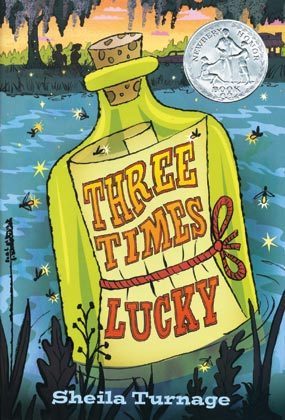 This book is a Newbery Honor book, an Edgar Award Finalist, and a EB White Read-Aloud Honor book, and it’s very clear from the first page why this book has been showered with praise. The quirk and ridiculousness of the small town of Tupelo Landing in which Mo LoBeau lives is shown in the swing of language and detail that make this a fun read-aloud, and an amusing narrative, despite high stakes and a rising tension. Mo’s half nosy kid, and half hard-boiled film noir detective. Life all works out pretty well before there’s a murder in the next town. Suddenly there are detectives and deputies and strangers wandering around. And a string of back luck happens for Mo’s best friend, Dale – his brother has a car wreck, his father, a mean drunk, turns up, and then to top it all off, the Colonel disappears, and there’s a hurricane – a bad one, the kind of storm where people get lots. It’s up to Moses to sort out all of the things that need sorting — she’s determined that nothing else get away from her. Not the Colonel, Not Miss Lana, and not the life that she loves. By sheer grit and force of will, Mo gets lucky – one more time.

But before all of that, Moses, as her downstream family called her upon discovering her infant self in the water after a hurricane storm surge, is at her best when stuck right in the middle of everyone’s business in the small cafe her adoptive parents own. A natural-born detective, Mo’s nosiness and ability to insert herself into the middle of everything has meant that where there aren’t mysteries in her tiny town, she makes sure that’s because she knows everything – and if she doesn’t know, she gets her bestie Dale, or one of his extensive family of cousins, to tell her. Mo is a centerpoint in many lives. Mo’s Colonel found himself when he found Moses – but still hasn’t found his pre-storm memory, eleven years later. Miss Lana, Mo’s Downstream mother, found herself in parenthood as she raised Mo through her tempestuous temperment, and calmly keeps them afloat as she can. Both the Colonel and Miss Lana sometimes need a break from each other. The Colonel vanishes to sleep under the stars while Miss Lana visits her cousin. These departures make Mo even more anxious to keep what she has of family together – and makes quiet worry sprout up from within her. What if someday, the Colonel and Miss Lana also throw her away, like Mo’s nemesis suggests happens to her?

But, for the most part, Mo is a pretty positive person – despite the unfortunate name, she has friends, she has work, and she has a lot of schoolwork which she… interprets her own way, to amusing results. She has her box of notebooks in which she writes letters to her Upstream Mother, the one who gave her life, and made sure she’d keep it by strapping her to a floating sign to see her safely through the storm. Mo ably keeping the faith that she’ll someday meet her birth mother with the enjoyment of living with her found family. Her longing for connection, home, and family imbues each page until the last, and the different ways in which she has all three are clearly depicted throughout the text. It’s a beautiful thing when Mo realizes what she has in her own two hands, and stops searching, but celebrates her find.

Readers will love her for that, and hope they can do the same. I think the nephews will be amused by this one, if not fully invested in figuring things out before Mo does. The mystery is twisty enough that it’s an actual surprise – no way Mo could’ve known half the adult stuff that happened – and I suspect this will be great for both younger teens and older ones, for whom the longing for home will make sense.