The main character in this novel is fourteen years old, so this book sits on that uneasy marketing line between YA and middle grade. Sometimes the character seems both older and younger, and because of the difficulties in situating her, I’m placing this book in Upper MG, because the character is both helpless and helpful, naive and knowledgeable. She’s neither fish nor fowl, and that’s… about just right. In the author’s note we read that this novel, also being neither fish nor fowl, never sold, so she self-published. It is a TRUE T. Kingfisher novel, in that there are utterly surprising twists made of the ordinary, and a whole host of unusual characters (including animate gingerbread men) who are simply memorable, and magical… almost as magical as sourdough.

Mona is making her way from young womanhood to adulthood in a quiet, mostly predictable way in the city of Riverbraid. She works in the bakery of her rather overbearing Aunt Tabitha and retiring uncle who is a war veteran. In a city full of Important Wizards, Mona has magic – though Mona’s magic is, by city standards, nothing special. It kind of… only works on baked goods, which is fine, because her goal is to bake well. She has a familiar… aaaand, it’s a sourdough starter. She calls him Bob. (It’s also mildly carnivorous, but the bread he makes is AMAZING, so… they just accept the cellar will always be clear of rats.) Aside from the first accident which created Bob – a bit too much magic directed toward a starter – Mona’s not really much of a wizard. If they’d had more money, she could’ve gone to school, and maybe learned to do a few things other than make batches of gingerbread that can stand up and dance. But – as it stands, she works in a bakery, and, other than the few unfortunate nosy/pushy customers who feel empowered to comment on her prospects and marital status, life is Mostly Okay.

Don’t ask me where the cookies get the dances they do – this batch had been doing hornpipes. The last batch did waltzes, and the one before that had performed a decidedly lewd little number that had even made Aunt Tabitha blush. A little too much spice in those, I think. We had to add a lot of vanilla to settle them down. 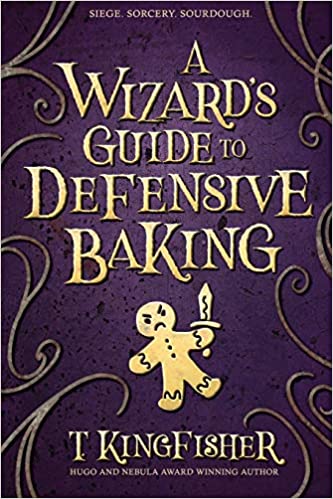 All THAT changes the morning she finds the dead body in the bakery.

It’s horrifying and scary, but the worst thing is that a.) the dead girl is someone Mona had seen around and, b.) she, Mona, once she calls the constables is accused of the murder. She’s basically dragged out to the Inquisitor – a very major Wizard in the city – and loomed over. It is deeply unpleasant. Then… anticlimactically, she’s found innocent, and let go. No apology, no explanation. And that’s fine, fine, fine, IT’S FINE. Mona races home to dive into safe, predictable routine again — but she can’t. Now that she’s looking at her world, she can see the cracks. Laws have been changing. People have been vanishing. Magical people, who have only a little bit of spark, a bit of “nothing special” like the bread magic Mona has. And Mona realizes she can’t just shake this off — she might be next.

“It seemed like once you agreed that the government could put you on a list because of something you were born with, you were asking for trouble.”

The trope of “Non-Chosen One With Few Talents Saves Everyone” is familiar, as is “Treacherous City Leaders Make Power Grab And People Must Revolt.” The “Reluctant Hero” trope is equally well-known. As I said before, Mona exists in a league unto herself, however. As the murderer continues to stalk the city, she… hides. She runs. She ducks. She wails that the adults aren’t doing bupkis. She does not somehow, magically, Rise To The Occasion. This is no Harry Potter, folks. She’s fourteen, and not crazy – what is SHE supposed to do about a serial killer? She’s a kid – and she acts like it. Sometimes she’s self-pitying, and sometimes she just doesn’t put all the pieces together fast enough (leading to some AWFUL scenes of “OHNOHESRIGHTBEHINDYOU” terror; you can tell the author was working on a horror project concurrent with this one). Mona is determinedly Fourteen and Not A Heroine. But, she turns into one – out of sheer, grim necessity, in the war to save the city. It is bitter indeed that something Mona loves is turned into a means of destruction against her will. And yes: people die. You may cry.

For an adult reader of fantasy, some of the “failed” tropes of this novel can be difficult to accept – but I was fine with Mona not being a “normal” heroine. Granted, I did have to put the book aside and come back to it… but not because of Mona being “too much” of an actual kid. Midwinter Pandemic, reading books with loss was just too dark for me, and too, too real – dead bodies, social inequality, and nonsensical jingoism that masqueraded as patriotism (I read it in January, 2021, natch). There’s a scene where Mona’s veteran uncle says something to her that just… hit me directly in the head, that spoke so loudly to the political moment – that people get medals pinned on them, and everyone cheers, but wouldn’t it be nicer if nobody NEEDED the medal?

You expect heroes to survive terrible things. If you give them a medal, then you don’t ever have to ask why the terrible thing happened in the first place. Or try to fix it.

This is social commentary wrapped up in sourdough. Take a bite, and may you love it as I did, but reader beware: it, like life, has a bit of a hard crust.