Growing up is tough anyway, but if you’re in any way different – say, you wear glasses, or braces, or an assistive device or if you’re too tall, too short, too fat, too thin, too loud, too quiet, too shy, too brave, too freckled, too pale, too dark, too light — life, from the playground to the locker room, can be sheer hell. Like many books about kids being bullied, this book, written as a novel in verse in the style of Sonya Sones, will break your heart. But, not only that — it will also illuminate a few things, mainly the ways in which we have to strengthen ourselves to stand up to bullies, that we as a society have bullying as practically a built-in standard of behavior. We are sometimes horrible beasts, we humanUNkind. I hope readers come away from this examining their own nascent biases, and promising themselves to think of themselves and others as more human than before. 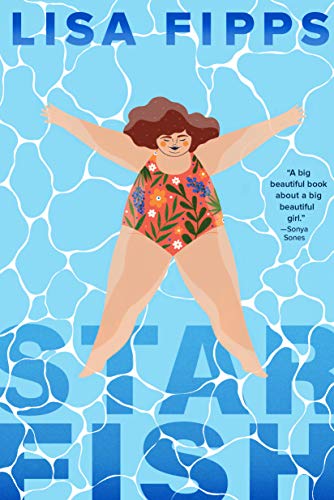 Ellie is tired of being bullied, and with her best friend Viv moving away, the idea of going to middle school is nothing short of terrifying. At eleven, Ellie has already seen and heard it all – the snide remarks, the “whale” song, the kids who don’t even know her giggling, whispering, and pointing while the two mean girls who have dogged her steps since elementary school continue to get worse. School is a torture, but home is not much better, and that, too, is only getting worse. When her mother starts making noises about another therapist, doctor, or diet, Ellie can’t take it anymore. She’s going to …do… something rash if the pressure doesn’t relent. All she wants to do is dive down to the bottom of the pool and scream. But, “Splash” as her sister calls her because of a cannonball she did when she was five, can’t stay in the water forever. With a new school year beginning, and a new neighbor moving in next door, maybe Ellie can see if she can reverse one of her Fat Girl Rules and learn to take up space on land.

Parents always play a role in the shame and horror that kids feel in a bullying situation – whether by advocating for the child, or allowing the behavior to continue. the author depicted Ellie as having parents which fell strictly into two camps – one doing his best to support her, the other doing the most damaging bullying herself – her mother. Ellie’s mother’s constant criticism and damaging words set a tragic example for Ellie’s siblings, her siblings to distance themselves and outright loathe her, because she is held up to the family as flawed. Ellie feels responsible for all of her parents’ fights, because her brother tells her she is — if she would just not eat, and lose weight, everything would be fixed.

Possibly the most horrible thing for me was the family’s religious practice intertwined with this. Ellie identifies as both Jewish and Christian, and receives Shabbat blessings on her head from hands that during the week hold her away, and a blessing from a voice which does not bless, but slings fatphobic curses. It is a travesty.

I don’t think I’ve ever read a middle grade novel where the unrelenting pressure society puts women’s bodies under is so clearly depicted – usually those realities are saved for YA. Yet Fipps hits every single microaggressions and major hostility fat persons face, from the subtle to the in-your-face ways that an appearance-obsessed society seeks, all day, every day, to shame, manipulate, control and direct the attention of women of all sizes into perfecting themselves to some unattainable standard. All of the painfulness, distortion, and abuse is distilled into its most poisonous essence of one woman badgering another (very young) woman into compliance. For her own good. So people will like her. So she won’t have to look at her and see anything “wrong.”

There’s a ton of research about what body-shaming does to human brains. It’s damaging, and we know this. And yet, fat-shaming is one of the last frontiers for “acceptable” bullying, wherein total strangers think they can say something about your worth and habits, based on what they see of your body – “for your own good,” and a multi-billion dollar image industry continues to sow the seeds of panic and dis-ease and fear in people who so don’t want to be on the outside or looked at “that” way. It’s insidious, and yet it continues and continues to pick up speed.

The worst thing about truth being stranger than fiction is that a whole lot of people will probably read this book and think that the author made up a bunch of it for revenge, or to gratify herself, or to make a point. I can attest: she did not. Much of the emotional violence in this book is par for the course, if you grow up fat. I heard some of the meanest comments about my appearance from my blood relatives. Lisa Fipps wrote a clearly voiced, powerful book that is an important addition to the conversation about internalized oppression, difference, and acceptance. I imagine it will be a building block for many conversations about difference in times to come. I hope readers don’t discount their reaction to this book. May we all take the sadness and anger and do something with it, advocate for someone who needs it, even if that someone is ourselves.