It’s a little unfair, but I had access to this book months before it was published, and my review of it comes from my reading of it at that time… 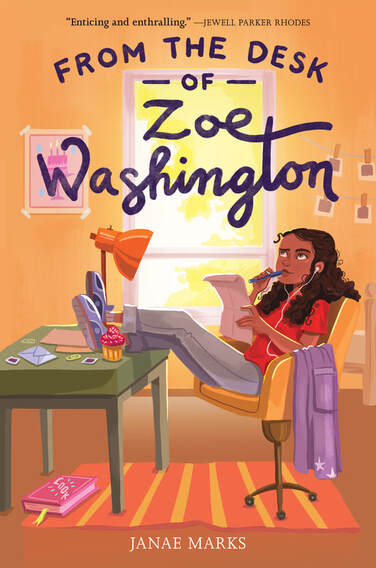 FROM THE DESK OF ZOE WASHINGTON: In this heartfelt and charming debut novel, twelve-year-old Zoe Washington uses her tender, stubborn spirit to find a way to help her wrongfully incarcerated biological father.

Aspiring baker Zoe Washington is a curious, persistent dreamer. Living as she does in the center of a warm circle of three – her beloved grandmother, mother, and stepfather, Paul – Zoe is cradled and cherished, but eager to springboard herself ASAP into her ambitious plans for the future by entering the Food Network’s Kids Bake Challenge! Her twelfth birthday gift of a cupcake-baking party at a local bakery is the perfect present, the pinnacle of all she thought she wanted. It is after this party that Zoe receives a birthday card – from her incarcerated biological father, Marcus Johnson.

The surprise of his interest is both frightening and fascinating; on the one hand, he’s a convicted murderer! On the other hand, he wrote her a really nice card, like a normal father would. Just who is this guy?
The quick impulsiveness that leads Zoe to secreting her father’s card into her pocket, then concocting a methodical – though flawed – plan to involve herself in his life characterizes her quick compassion throughout the novel. Zoe is authentic, headstrong but tender-heated, and the realization that some people are in jail and did nothing wrong is a shocking, grievous, reality.

Though the ideas that the police are not always right, and that truth is rarely black-and-white is difficult, Marks conveys them in a non-patronizing manner which may spur discussions on social justice and fairness with young readers. The author doesn’t downplay the truth about wrongful convictions or the immense impact of mass incarceration on communities of color, but neither does she dramatize it, allowing the reader to focus, instead, on Zoe’s discovery of the amazing work of the Innocence Project, and the bittersweet blossoming of her relationship with her birth father.

Ultimately triumphant, FROM THE DESK OF ZOE WASHINGTON gton tackles some of the complex costs of the pursuit of justice and motivates readers to feel equipped – and energized – to stand up for what’s right, right now. Readers will recognize that, like Zoe, they need not wait until they grow up to make their actions count. Out now, and available and timely for middle grade readers.