“Wait,” he says. He opens the bag and holds it out to me. “Take some,” he says.
I wonder if I’m understanding him right. “Some what?” I say.
“Money, girl, money,” he says, clearing his throat. “Money won’t never do you wrong.” 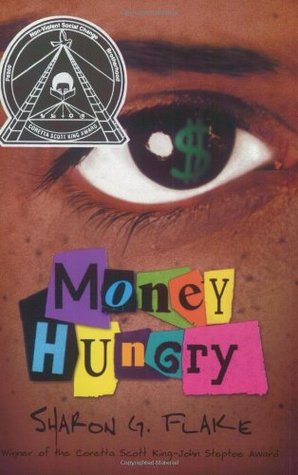 Like so many kids, I didn’t get an allowance, and started hustling pretty early – sixth grade – for money of my own. I pulled weeds, babysat, cleaned houses, and sorted books in dusty school libraries. Though I never spent hardly any of it, I was Jill on the Spot, as far as my parents were concerned, often loaned out in one of those “we’ll get one of the girls to help you” sorts of deal parents do. Inevitably, when my Mom or Dad was short of gas money or money at the post office, if we kids had it, it was borrowed – and I say “borrowed,” but family for us meant rarely-to-never paying anyone back. After all, they raised us, and all of our money combined went to keeping a roof over our heads. This game me a weird sense of pride.

That reminded me of CSK Honor Book MONEY HUNGRY by Sharon G. Flake, which was reissued with a beautiful new cover. First published in 2001, it tells a hard story of Raspberry Hill, whose determination that she and her mother will never, ever, ever again have to live in a van up on blocks causes her to obsess over all things cold hard cash. She sells pencils, old chocolates, car washes – you name it. Over time, the money adds up, and it represents safety and health to her. Raspberry regularly counts it before she goes to sleep, in order to soothe herself, and promise herself that the boogeyman of poverty will be kept with it from their door. It – not her mother, or her friends – comforts her. And when through her mother’s miscalculation and anger, it goes away, setting off a cascade of other horrible luck which sees them back out on the streets, it nearly breaks her. 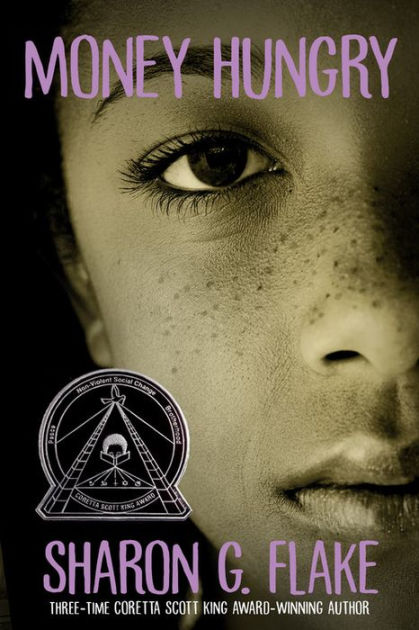 This is one of those books which really exemplifies Dr. Rudine Sims Bishop’s Windows, Mirrors and Sliding Doors metaphor vividly. As with all of the work of Sharon G. Flake, it takes a small part of a big topic and focuses in on an individual, so that they become real. I can imagine suburban kids encountering this book in the early 2000’s with shock and horror, unable to imagine anyone hustling that hard, while other kids saw themselves in fiction for perhaps the first time. Now twenty years later, I wonder how it will be received. I suspect that the gaps between haves and have-nots have broadened and whose family feels the pinch of want has shifted ethnically and culturally, leading many more kids to see themselves depicted in these pages.

One thing Flake’s books don’t do is coddle the reader or cater to their emotions. While this book ends with the “kernel of hope” that many writers insist is what makes children’s books work, it also clearly shows how fickle the world is, how much luck and timing play into things, and how fragile we are as a society, driven, as we often are, to rely on the kindness of strangers. It has a companion book, Begging For Change which shows that though Raspberry has dreams, she has further to go to get to them. I respect that she didn’t give readers the easy out of a happy ending written in rainbows. Raspberry has to hope in herself, trust in the adults who care about her, and follow her mother’s example of going to school, hustling hard, and asking for all the help they can get from anywhere they can get it. It’s hard not to imagine her not getting there eventually.