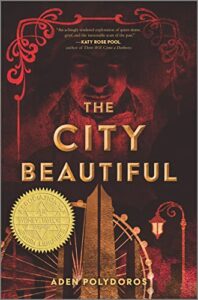 I was not at all surprised to see that Aden Polydoros’ The City Beautiful was a Sydney Taylor Book Award winner. The writing is excellent, the depiction of Jewish life and the historical time frame is vivid and colorful, the character development is deep and satisfying (though there could have been more female characters), and the depiction of queer romance (and the need to hide it) was interwoven well. It’s really more in the vein of magical realism, or possible magic, rather than straight sci-fi or fantasy, and it also happens to be a gripping, darkly enchanting murder mystery.

Main character Alter Rosen is a devout Jewish young man working hard at a local newspaper in Chicago, sharing a crowded apartment with other boys and trying to save enough money to bring his mother and sisters over to America. It’s the time of the World’s Fair, a celebration of pomp and prosperity that manages to cloak the city’s seedy underbelly rife with dark doings.

One of those dark doings? Alter’s best friend Yakov turns up dead. While helping with the traditional preparations of the body for burial, something very strange happens to Alter–and he’s convinced that the dybbuk of Yakov has slipped into his own head, looking for revenge.

Alter enlists the help of an old friend from his early days when he first arrived in Chicago–a time when Alter had to steal and swindle to survive. Frankie is now a power player in the Chicago underworld, but he’s charming and genuinely cares about Alter. As their relationship starts to grow in a different direction, more young Jewish men turn up dead, and Alter becomes more and more anxious to solve Yakov’s murder.

A few things really stood out to me in this book. First, the level of detail invested in the setting–both place and time–was fantastic, making World’s Fair Chicago a presence in its own right. Second, the intricacy with which the author depicted the life and day-to-day habits of a devout Jew, and the practices of Judaism, was illuminating (for a non-Jewish person) and profoundly humanizing in its portrayal of the immigrant story. Lastly, the author does a masterful job of portraying the presence of queer people in history–rather than making the assumption that their story is one of erasure and negation, he grounds them firmly in time and place, and depicts the many ways that queer people navigated their everyday lives, found love, and connected with allies. This one was a major contender in our group discussions!