Full disclosure: I did not read the John Green cancer epic. Having foster siblings and kids I babysat on heart monitors with tracheal tubes meant I was not a kid who was interested in sick lit as entertainment, and now as a reader who has had my share of ill and dying friends and relatives, I am doubly not a fan. I know it’s a literary classification that has its adherents and serves a useful and informative purpose for many, but I just can’t take it. That’s why realizing this book dealt with illness was like tripping over a big rock. I turned a page, and boom. I …didn’t realize that anyone would be sick. I thought this book was just about… stars. 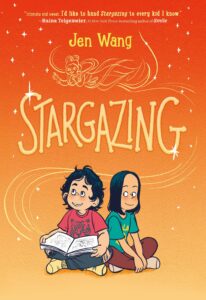 Haha, that’s what I get for literally judging the book by its cover and not reading the back matter. I love it when I just glance at a cover and say something inane like, “Oh, yeah, Jen Wang. I like how she draws noses!” Sometimes one discovers the best gems in the most random way.

From the beginning, we’re shown that the main character in this novel, Christine, is involved in a church community. It’s not depicted as something she has to care about, fight against, or be criticized for — it’s just how her life is. Her family is churchy with some Protestant denomination, she plays her violin in an ensemble for church, and they have potluck like some eighty billion other people on Earth do. As they’re eating, a strange girl comes in and fills a plate. The kids in the ensemble wonder why she’s there – her mother, Mrs. Lin, works at the plant nursery next door to the church – but they’re not really all that interested in the outsider, whose name, Christine is told, is Moon – like Sailor Moon, which is seen as weird. She’s rumored to “beat people up,” which is enough for Christine to not want anything to do with her. 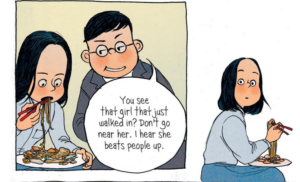 Christine’s parents, however, have different ideas. On hearing from another member that the nursery lady is a single parent struggling financially, Christine’s mom and dad start clearing out the small in-law apartment where their Christine’s grandpa used to live. Over Christine’s weak protests, they welcome Moon and YuWen Lin into their world – and are welcomed in turn, though Christine soon finds that Moon’s world is totally different from her own. Moon’s vegetarian – no pork in those noodles they’re invited to eat for dinner. And Moon’s Buddhist, not Christian like Christine. And …sometimes Moon says the weirdest things, like that she’s from beyond the stars, and has friends who are celestial beings, like angels. No matter how weird she is, though, Christine can’t help but like her. Moon is brash and charismatic, her big heart right there on her sleeve — and not at all hung up on worrying about things like Christine.

As often happens when people from different communities mingle, Christine finds the differences between she and her new neighbor invites comparisons. Moon just throws herself into life, and life seems to catch her. Everything is so good for her – Moon and Mrs. Lin are a team – unlike Christine and her parents, who have a more do-what-I-say parent-child relationship. Moon and Mrs. Lin do stuff like go to concerts and paint their nails, but Christine’s Baba frowns and reminds her that she has a greater purpose than nail polish and messing around. Christine has to go to Chinese language school, scholastic tutoring, violin lessons, and church. She doesn’t know from KPOP, she can’t dance or sing or draw like Moon can, and she feels an immense pressure to be perfect. 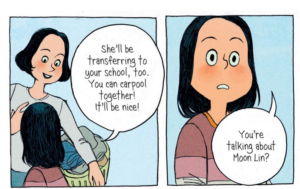 Christine’s comparisons continue at school, where the friendships Moon makes suddenly feel threatening. When Christine responds with a tiny bit of spite, pushing one of Moon’s obvious buttons, knowing she sometimes has big emotions she can’t handle — the repercussions are immediate — and then explode outside of what anyone expected. Moon ends up hospitalized, and Christine is terrified, sorry, and cannot face her. Fortunately, Christine’s father helps her make the first move so that she and Moon can begin again.

I was struck by the fact that Moon expresses a wistful sadness post-surgery about how her life has changed. Moon had believed in visitations from celestial beings, but wakens to the fact that the visions that she had were mini-seizures. This reminded me a lot of the unhealthy attitude that some artists have toward medicating mental illness – if they take a drug, it will mitigate the illness, won’t it? And somehow rob them of their art? I like that Christine is in this moment able to act in the role of her Baba and lead Moon into thinking about what else her life has contained, and what else she’s going to be able to do when she heals. The author ably uses this moment to push back against the dangerous myth that creativity requires suffering and sickness for art to flourish. Moon’s brain is MUCH better off after surgery, and the hopeful novel ending – complete with KPOP dance talent from the church violin ensemble because why not – reinforces this idea. Good things happen down on earth, too.