Odd how it never occurred to me, through the years and years and YEARS of Sherlock Holmes, Miss Marple, Midsomer Murders and Poirot episodes on PBS that there’s something just a skosh morally gray about murder investigations. How many times did Poirot tell half-truths, for the sake of getting something more from a British suspects, who thought he was just a stupid “insert racial slur for French people even though he was Belgian”? How many times did Miss Marple lurk and linger, dig through trash and read notes not addressed to her? And I won’t even start in on the Midsomers people. It’s kind of bizarre how, when watching a show, you just eat that stuff up, and pass the popcorn. It’s a lot harder to swallow when the investigators are a.) teens b.) teens who end up finding the body of another teen, and c.) teens who might not be taking their safety seriously while they’re using burner phones, starting Facebook hashtags and full-on rattling the cages of those around them. Suddenly, people’s feelings come up, and crossing, double-crossing or being fed information from strangers doesn’t seem like a great idea. And yet, the Agatha’s can’t stop — don’t stop — because there’s just too much at stake. 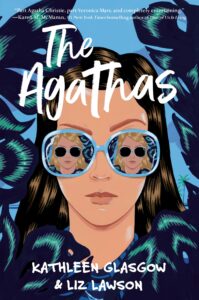 The Agathas – Alice Ogilve and Iris Adams and occasionally the Zoners, Iris’ roller skating sidekicks – both have reasons for getting together to solve the mystery before them – wealthy Alice is disgraced, and very poor Iris is invisible. They’re also both desperate. For different reasons, they know they can do a better job that the police at figuring out what’s going on when a classmate goes missing, is found dead, and then her boyfriend is arrested. Why are adults always disregarding that not all teens are the same? Why do they always paint with the same, ratty brush, whole groups of young adults because of the because of the behavior of a few? Adults’ blind spots are used against them brilliantly in this story — but the blowback that happens also takes advantage of a few teen blindspots, too. There are people that ALL of us ignore – when they’re tryhards, when they make us uncomfortable. At the end of the day, innocent people go to prison sometimes, too…

Liz Lawson and Katherine Glasgow have written an absolutely riveting mystery, which, given the intensity of Glasgow’s other work, is unsurprising. This has its hilariously ironic moments, and fun pop culture references (*chef’s kiss* Veronica Mars), but make no mistake, this is SERIOUS business in terms of suspense and chills, and has immense crossover potential for adult readers. I can see it getting SO much love from the Mystery Bus fans, and it’s not going to be the ONLY book in the series. Color me excited.

PS – Hat tip to LEILA who continues to jack up my TBR and suggest I read something RIGHT NOW.