– from The Science of Breakable Things, by Tae Keller 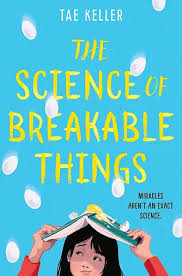 I picked up this book because the title said the word “science” and the flyleaf used the word “miracle.” I’m always intrigued by characters who are digging into theology and science to find the answers to the big questions in their lives. Alas, this book doesn’t contain theology at all, but it does contain a very thoroughly experimented science – a fun, yet frustrating egg-drop contest, and an elusive answer to the question “how do I fix my Mom?”

This was both a quiet and meaningful book – with an enjoyable secondary storyline about friendships – those we lose, and those we keep, and the new ones we gain – and about an energetic and well-meaning (if a little too full of enthusiastic hashtags) teacher. It was a quick read which aimed a little bit over kids’ heads, so many of them will need to read up a little, but I expect that because of the clear way it conveys information, it’ll be a favorite of librarians and teachers.

I was curious, after I dug this latest book from the pile, about the author. I’m not always – honestly, it’s kind of ironic how much pressure we as authors get to invest in our web pages and social media presence when, a lot of the time, readers just don’t care. But, anyway, this time I was curious, because the character in the story, Natalie, mentions that she is a quarter Korean, and doesn’t have a “typical” Korean appearance.

That “quarter” mention was both pretty specific and pretty rare. There aren’t a lot of books in which mixed raced characters acknowledge their …pieces, and those of us in the “quarter X” category know the awkwardness of no one being able to see all of what makes us who we are… to the point where sometimes even we forget it might be important. I loved that the author brought that out, and felt connected to Natalie in a tiny new way I might otherwise not have been.

This isn’t to say that I didn’t connect with the character at all – I know more about depression than I want to, and I think the topic in children’s books for any age is timely and relevant. For me, however, the character’s voice didn’t feel as organically youthful to me as it could have – but just because I would have voiced the character another way doesn’t mean I’m throwing shade. Writing about depression is hard, and a child coming to grips with a depressed parent is awful. Natalie’s baffled grief and then rage resonates emotionally with the reader. I felt her disappointment with her father, himself a therapist, and his paralysis, and genuine inability to know what to do. That felt very true. 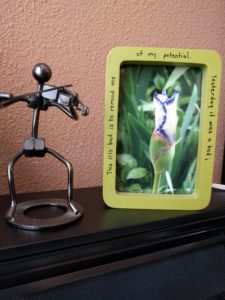 Another thing which felt true – and significant, without telling you much of the plot – was Natalie’s interest in botany, which is a gift of her mother. Botanists, Natalie’s mother explains, are just the same as therapists, because they seek to try to get to know what a plant is feeling, and nurture and care for it, just as Natalie’s father seeks to figure out what a person is feeling, and nurture and care for them. Natalie, meanwhile, is slightly suspicious of her father’s career, and doesn’t know an orchid from a hole in the ground, but she really does love her parents, and is suffering through her mother’s withdrawal and sad silence. She wants to love what her mother loves, and she believes so strongly that the key to her mother’s happiness lies in caring for plants that she’s prepared to beg, borrow, or steal every single plant in the world to get her there. My heart is pretty well taken over by flowers of all sorts, so that really resonated with me. I feel equally as crap when they die as Natalie does, and her desperation to help her mother overcome her mental illness really rings true. 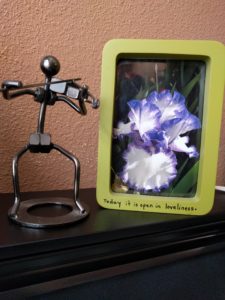 But, back to the author. A little poking around revealed that Tae Keller of biracial Korean ancestry, and probably put a little of her own experience into her writing. Additionally, I found a little snippet in the Honolulu Star way back in 2005 about a poem she wrote when she was eleven! This is a woman whose path to writing was established very early. And, given that she was born in the 2000’s and The Internet Is Forever, her readers will be able to discover these bits of her life as well. I suspect that will be a really positive thing.