Having read K. Tempest Bradford’s work for adults, I immediately picked up her novel for kids – and it was SUCH a good choice. There is much here to delight the adult AND the kid reader. And, much to my delight, it’s Cybils season! This is one for the nomination board. 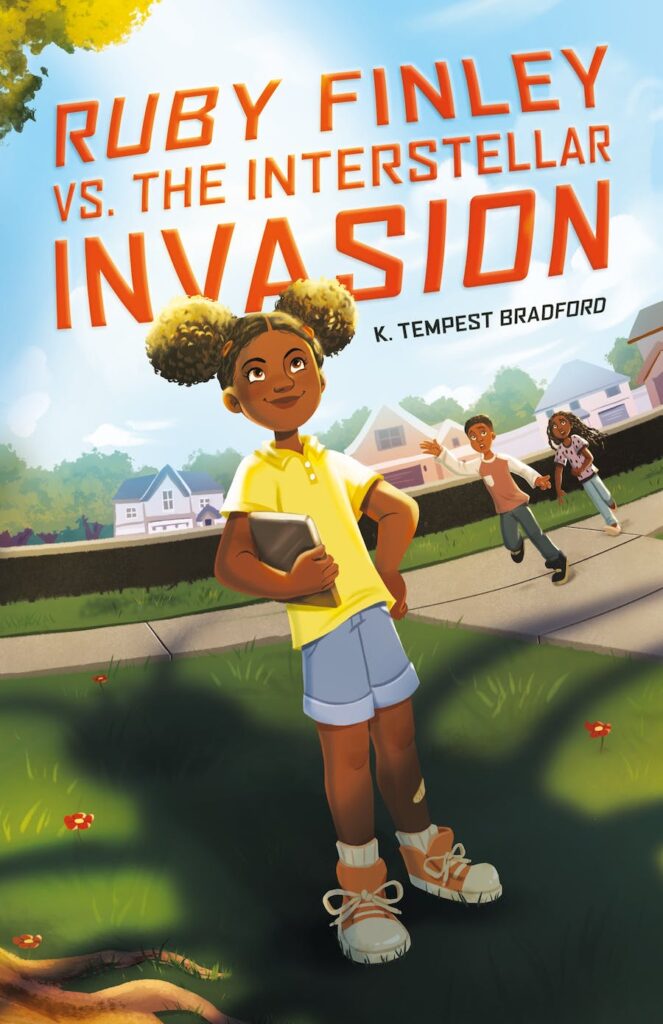 Look, Ruby just wants to talk to SOMEBODY about bugs, all right? Yeah, she knows eleven is way too young for a Twitter account, but that’s where all the good entomology talk is happening – not on the forums anymore. And, yeah, she also knows her Grandma is not all that hot on the idea of the mason jars under Ruby’s bed, full of various bugs she’s discovered during her rambles through the neighborhood, and if she sees them, there will be screaming, and hollering about “get that nasty thing outside,” but look, it’s for SCIENCE. Ruby just wants to look at them, and identify them, and study them.

Soooo, the day the one bug she catches melts a hole through both the jar she had it in AND her window screen, Ruby knows she’s in big trouble. When a bunch of white dudes in black suits with government ID’s roll up on her neighborhood – delete the tweet she put up with the image of the bug, and somehow make her school-issued tablet reset to factory specifications, destroying the picture she took, she knows she’s in big, BIG trouble. And once Grandma sees the hole in the screen and the FBI or whomever makes everyone stay inside, there’s no way her parents aren’t going to find out about the secret Twitter account now. She’s toast.

Getting grounded is soon the least of Ruby’s problems, though.

There’s something funky going on. Metal thefts – from not just construction sites in the area, but from the church’s pipes, fences, and other places around town – have gotten people worried. The neighborhood association works hard to keep the neighborhood safe, but something is getting past them – and everyone. Nobody hears a thing, but stuff is vanishing. Then the old lady across the street – with the vicious dogs – suddenly goes quiet. Ruby just thinks someone ought to check on her – just for her safety. What if the thieves are hiding at her house? When the neighborhood playground vanishes overnight, Ruby puts some pieces together. They’ve been invaded – for sure. And she might know where it’s hiding…

I cannot love enough that Ruby is a gifted young Black girl who isn’t really thinking things society tells us young girls are into – she’s thinking about SCIENCE, bugs, and video games. Her connections with her friends and family are her strength for the adventures she encounters. Her tight friendships with boy the boys and girls in her community aren’t without the occasional spat and screaming match, but they rely on each other, and even reluctantly hang out IRL when one of them is grounded and can’t get online.

I also love that while Ruby is Black, she hangs with both Black and non-black and mixed friends, as one does, and her friends and neighbors are both creatively and generationally diverse. This book is the anti-stereotype; one male friend cooks, Ruby’s father is emotionally available both as a parent and as an adult male, and the girls are supplied with video games as well as the boys. There is genuine thoughtfulness present even in the midst of the excitement and adventure; Ruby struggles with a teacher who doesn’t believe in her potential and tries to dumb her down, and learns anew what parents are for; a secondary storyline touches on the neighborhood’s overlooking of a sour, elderly woman they call Witchypoo, who turns out to be someone in need. Ruby realizes she’s believed things about her people and situations prior to her own investigation, which is not scientific thinking, nor very kind. Later, these realizations assist Ruby in altering her perceptions for the good of… um, mankind, which in turn, helps to solve her mystery.

I’m really hoping this isn’t the only K. Tempest Bradford MG specfic in the pipeline. This one was FUN, and I’d put it into the hands of any kid who loves a good adventure, boy or girl, Black or white. I enjoyed this, and wish the same for you.