I NEEDED that badge. Not only did it look cool, it would be physical proof that I had BEATEN this camp.

I’d passed. I’d WON. I’d shown that I didn’t need anybody, and that was…

– from BE PREPARED, by Vera Brosgol 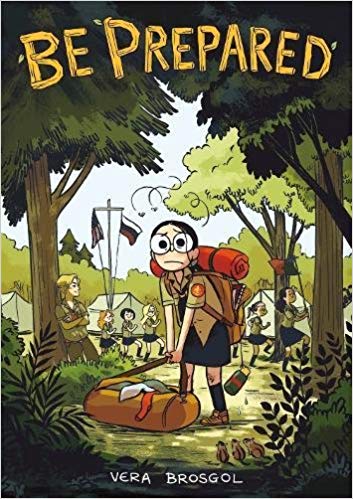 Ever since Sarah reviewed Anya’s Ghost a while back, Vera Brosgol’s been on my radar. I am a big fan of graphic novels, and any novel dealing with identity and fitting in – in this case within and outside of an immigrant community – is in my wheelhouse. I chose this novel in a five-minute trip to the bookstore based solely on the cover image. Vera looks the dictionary definition of woebegone… which is mostly what I felt at summer camp, every single time I was there.

Vera is not good at being Russian in the U.S. – her family hasn’t got the money or the church or the house or the food or the toys right. While all of her friends have Carvel ice cream cakes and go to the Hamptons for the summer, Vera’s family has… grocery store cake and pizza without stuffed crusts. After a disastrous birthday sleepover in her tiny apartment where all of her American friends decamp before daylight, Vera hits upon the idea of going to a Russian summer camp. Obviously, among those who understand her culture, everything will be wonderful, right?

Kids, for good for for ill, can be much the same in any culture. Camp is horrible. Vera is placed with a pair of teens vying for the attention of the same boy, there’s no running water, and the outhouses are filled with slightly gargantuan spiders. Mosquito bitten and reminded constantly to speak Russian, Vera is by turns humiliated, humiliating others, weeping, furious, and plotting.

She is also hilarious, and hilariously drawn. Her scowls are EPIC.

This novel depicts a very difficult time in a young girl’s life – and how she wimped out about a lot of things – as would many of us – but sucked it up and dealt with what she had to, until it was over. (And it IS over; Brosgol admits that there’s no sequel planned… yet.)

A lot of times people look for some socially redeeming message in a novel where a character goes through a hard time… and I was grateful not to find that here. That camp? WAS AWFUL. And that was okay. We don’t all have to like and grow from every experience. Sometimes, it’s just about endurance. And looking back and laughing later on.

I can’t wait to pass this one on to the Nephew crew.