Since a “cozy” is a subgenre of crime fiction where the mysterious doings (murder/mayhem) are off-screen and the sleuth is usually funny (either amusing or odd), this novel straddles the line between being cozy and being plain YA – because the sleuth is neither amusing nor strange, only an average over-achieving teen — but neither is she warmly personable nor cozy. The main character is lightly drawn – so lightly sometimes that we don’t get a sense for her personality, but the detail and setting are vivid. This is a first novel in a series with a bit of potential. It’s kind of Hawaii 5-0 – the original “book ’em, Danny” one, not the recent makeover – meets Nancy Drew — again, the 1940’s original, not the new one. By that I mean the adults are kind of slow, and the teen runs rings around them, of course.

This novel also has a transracial adoption subplot, as the Chinese-born protagonist was adopted by North Americans.

Summary: Sixteen-year-old Nicki Haddon isn’t Hawaiian, but lives there – when she isn’t competing in martial arts around the country. A child of very wealthy property owners – wealthy and clueless, as they call all of their butlers by the same name – Nicki has all that she wants but their attention. At the moment, she’s in Toronto on her way to train with one of the premier kung fu masters in the country at Fire Dragon Academy. But bored and alone in Hawaii, she’s arrived early – and finds she’s arrived just minutes after the Master has been stabbed. Her timely call for help saves his life, but his incoherent mumbling about a Ming vase has her worried and intrigued. First, what Ming vase? And, why is it up to her to get it? Through a fast-paced series of slightly improbable events, Nicki, who was born Fu Yin, tracks down the whereabouts of a fake vase, a real vase, and the culprits behind its theft and the attempted murder. 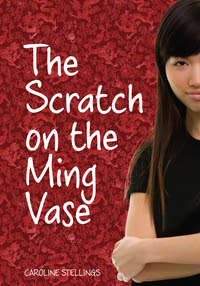 Peaks: This is a mostly bloodless mystery, fast-paced and appropriate for older middle graders to young adult readers. As in most cozies, it’s easy to tell who the suspicious folk are, but less easy to tell why we should suspect them. Nicki is young and Asian and has a lot of agency, and we learn a bit about the Chinese dynasties, Ming vases, and the emporium.

Valleys: I found the characterization very light in this novel. The narrative is well-plotted, but there’s not a lot of emotional resonance with the character for me. I want to like Nicki much more than I do; I want to feel she’s genuinely lonely and bewildered by her absent parents. I want to feel these things for myself, rather than having the facts handed to me. Nonetheless, the pacing being quick glosses over the fact that we don’t know the character, and pulls the reader through the story, but if readers are looking for a relatable and warmly drawn character, they will instead find a sketch.

Conclusion: I think there need to be more YA mysteries and am always on the lookout for books which include characters of color so I’m glad I ran across this one. Despite some unevenness, the detailed setting, fast pace and over-the-top plot made this a light, quick read.

I received my copy of this book courtesy of the publisher. You can find THE SCRATCH ON THE MING VASE by Caroline Stellings at an online e-tailer, or at a real life, independent bookstore near you!