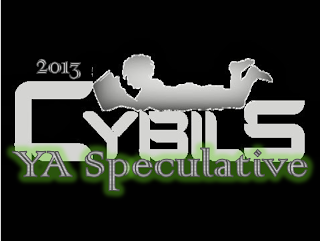 This book is a 2013 Cybils YA Speculative Fiction nominee.

Spinster. It has multiple meanings. One who spins, yes, but one also who is destined never to marry.
Crewel also is a word which, in an onomatopoetic sense at least, has multiple meanings. Crewel is freestyle embroidery done with thick, wool threads that produces a raised pattern. It’s been done since the 17th century or before… and of course, there’s the word cruel which is pronounced the same way. Cruelty often leaves its own thick, raised scars… There are multiple plots, multiple secrets, and multiple villains as well in Gennifer Albin’s debut novel, CREWEL. While sometimes the pace is a little too fast, and the emotions aren’t quite believable, this series may be another winner series for the dystopia series enthusiast. 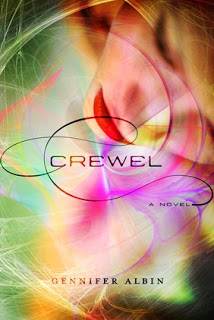 As well-used as the metaphor is in the title, I have to admit that I find the covers of all three versions of this book a little oddly bereft of metaphor or subtlety. There are a number of ways weaving time and space could be interpreted, and any number of spider or web or even loom-weaving or embroidery illustrations which could be brought into play. The generic slice of pretty-girl face surrounded by out-of-focus swirls of …fiber optics? on the U.S. cover, and the anonymous British looking model with the striking eyes seems a boring choice, though I will admit freely that I’m pleased to see an unusually rounded and less model-looking face on the UK cover. However, the worried-looking thirty-five year old woman depicted on the ebook cover makes the book look a little less than YA, but I suspect that few people actually pay attention to the “covers” on ebooks anyway. In any event, we’ll probably find that the trilogy covers will have some sort of emerging theme, as the series unfolds.

Concerning Character: It begins simply in a neighborhood on the world of Arras, where a teen girl lives a predetermined life. There are Protocols in place – the types of clothes she can wear – modest – the types of people with whom she can interact – other girls – and the types of things she can do – go to school and prepare to be a good, obedient Western wife. It’s a little life, until a certain, magical time. Teen girls are tested at a certain age to determine if they have it within them to be a Spinster. Spinsters, employed by Manipulation Services, under the auspices of the Crewler, are the spinners of the world – they determine what the people of Arras eat, where they live, and when their children come. They weave time, with matter. In the loom of life, spinners keep the threads bright and tightly woven. 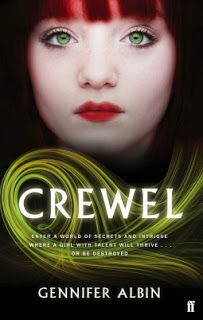 And the Guild is made up of men who order the lives of the Spinsters, and while they’re cushioned in a soft, perfumed, adorned life… it’s all on the surface.

It’s a life that few ordinary Arras residents know about, and Adelice was never meant to know. Her parents have trained her all her life to fail the spinster test, to not take her place as a weaver, but just once, out of pride, and a yearning to touch the threads… she made a tiny mistake. They have come for her, and dragged her into her new world — drugged and in handcuffs.

I found it somewhat disingenuous that Adelice didn’t figure out that her parents’ treasonous activities meant that they were part of some resistance movement. What struck me as most noticeable is that she didn’t follow-up on it. Despite the number of people who crossed her path who were clearly not with the Guild program, asking her questions about her parents, someone asking her about the hourglass symbol on her wrist, she never wondered anything. She never pondered, she never thought; she was merely an observer, a painted puppet, who stared at those around her with wondering eyes and watched as they took risks for her, were disappeared, or died. Her smart mouth and difficult behavior may have seemed like a type of resistance, but it didn’t seem to actually change anything much… 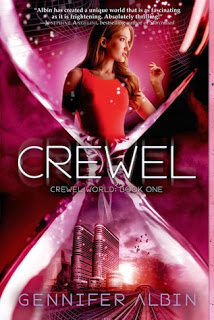 Her inauspicious beginning with the Guild is the least of Adelice’s worries. Her family is gone – maybe dead. With nothing left to live for, Adelice refuses to keep a low profile and answers back, refusing to be cowed. But the Guild deals with an iron fist, and soon Adelice is bruised, friendless, and nearly broken.

Adelice is the girl with something everyone wants. The Guild is the organization longing to control her, and all she represents. After all, she’s only a woman, and someone older, wiser, and male like the Guild Ambassador, should be in control of her many talents. Her position at the Guild tenuous, only Guild Ambassador Patton, who frequently reminds her that he could have her terminated at any time, keeps her alive. Maybe Adelice should be grateful?

Or, maybe it’s time to find out the limits of the Guild’s power – and where hers begins.

Book received courtesy of the publishing company for the Cybils. You can find your copy of CREWEL by Gennifer Albin online, or at an independent bookstore near you!