Another week, and another unique novel. After Leila so strenuously recommended Enchanted, I figured I had pretty well done my “every-fairytale-you-know-stuffed-in” plot for awhile. And then came this one, with duppies, Sasquatch, and Baba Yaga.

The crazy is never over.

Author Nalo Hopkinson grew up in Jamaica, Trinidad, and Guyana before moving to Canada when she was sixteen. As an author, she is known for her uniquely populated speculative fantasy, and I was fairly certain she could successfully cross into the young adult field. This novel is more imaginative urban fantasy than straight fantasy, and the level of crazy isn’t for everyone – it will be a bit too quirky for those who like all of their loose ends tied down – but for others, it has just the right amount of surreal.

Reader Gut Reaction: What we have here is a Journey novel – it’s obvious in that it begins with a reluctant character – being led or drawn to either tell a truth or act in a certain way, but dragging her feet, until WHAM, there’s no choice. This is coming of age, with a ladle of insanity – a novel like eating something spicy late at night and having weird, surreal dreams that are rooted in the familiar, but take you far, far away. The quest structure is very clear, but there’s no bowl of gold at the end of the rainbow. There is just a world, and a bucket of perceptions, forever, irrecoverably, changed.

I could see Hayao Miyazaki (Spirited Away)taking this novel and having a heck of a good time making it even weirder, though I think there might be a cultural disconnect on some of the deeper issues of color and ethnicity which are explored. This is a strange, strange novel which pulls together varicolored folk and folk tales from various cultures and sets them all bubbling in a stew in a volcano in Toronto, of all places. The setting is certainly fun and fresh – this is Canada with sharp edges. And teeth.

Concerning Character: Scotch is just a girl, hating an assignment she’s doing in school, which nonetheless allows the reader to see her – her hopes and her fears and her appearance. Scotch is both sexy-hawt and yucky, as she’s dealing with a very sticky, black, scabby skin condition, even as she works the short-shorts and the boots and her bodacious bod. The early structure of the novel helps us to understand Scotch’s dual mental states – happy, on one hand, with her school camouflage and her leftover bestie, and unhappy – after dumping her boyfriend, repeatedly screwing up her dance routine, and watching her ex-best friend talk to her ex – which apparently isn’t allowed. Scotch is erratic, selfish, moody, and overall, scared of a world in which cannot always be in control or find her feet – that of the old school world of the Caribbean, and her father’s Jamaican requirements clashing with the new ideas of Toronto. Especially as she contemplates a mysterious scabby growth on her skin diminishing her beauty, Scotch is not exactly endearing, but the world around her is interesting, and the reader is okay to stick with her story long enough to figure out what’s going on. For instance, what is with the horse thingies? What? As the world plunges into chaos, everything non-essential is boiled away. It turns out that the things we all know we should revere: family, friends, those we love – are the ONLY ones that matter.

Recommended for Fans Of…: surrealist fiction, where all sorts of weirdness happens, as in the worlds of Nina Kiriki Hoffman, Charles de Lint, Shaun Tan and Alan Moore. There’s not a lot of YA out there like it, as you can see; certainly very few which showcase Caribbean folktales. 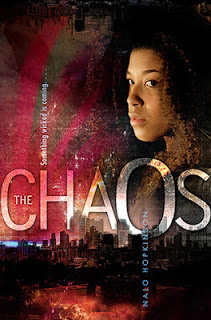 Themes & Things: Scotch is biracial, the product of a Caucasian Jamaican father and African American mother. Her mother and father share a lot, but they also struggle – and there are some deep, painful craters in the smooth road of family togetherness. Scotch’s brother is A Problem to his parents, and they react in a way that Scotch believes is overreacting – even as she nurtures a secret guilt about it. Scotch believes her father doesn’t really love her – he only has criticism for her – and she is grieved and furious by his perception of women as sweet and weak — because she herself is bawdy, bold, and strong. He does not see her. After an assault and accusations at her old school that she was a slut, Scotch’s parents have locked her into a conservative mold, classically blaming the victim, and forcing her into polyester slacks and sweaters which not only muffle her spirit but hide her body. Scotch believes that deep down, they believe that she did something to deserve what she got — why else would they muffle her in ugly clothes and demand that she limit her self-expression. Her grief, anger, guilt, and fear deep down often bubbles into bad choices and thoughtless, snarky behavior.

Scotch has issues with her coloring – despite a fair complexion, she self-identifies as black-Caribbean, but is irritated by how much more readily people identify her brother’s ethnicity, whose coloring is darker. A stranger’s comment, “You could be anything!” is meant to be freeing, but for Scotch drives home the point that she’s nothing concrete and fits nowhere – not black, not white, not Caribbean. She’s enraged with the person who so casually dismisses her cultural and ethnic roots, and takes refuge next to her brother – who is dark enough that no one questions him. It is interesting that later her “skin condition” creates a situation where questioning her racial or ethnic identity is no longer even at issue.

I found myself wishing the author had spent a little more time on some of the interpersonal issues of Scotch’s family, including her shaming, and the self-acceptance which came later – and the prejudices against the wheelchair bound Indonesian artist, the homophobia Scotch expresses – and later is forgiven for, easily, by her best friends – but the plot is more tuned in to the chaos – which is indeed wildly creative, but isn’t ever entirely explored and appreciated. Dare we hope to see more of this character and/or the Chaos and how it left the world?

Cover Chatter: Despite my distaste for novels with faces on the cover, I at least like the chaotic nature of this one – the slashes of color indicative of the volcanic activity, the city on fire – and the face of a girl. Above her head, the city skyline is repeated – a world upside down.

Is the girl light enough to “pass” as the author at one point suggests? Could she be “anything” ethnically? For me, no, but that’s something only answerable by individual beholders. I’ll be interested in which direction the publisher goes when the novel comes out in paperback.

FTC: Sourced by a library copy, unsolicited review.
You can find THE CHAOS by Nalo Hopkinson online, or at an independent bookstore near you!