– from A Turdor Turk (The Chronicles of Will Ryde & Awa Maryam Al-Jameel), by Rehan Khan

While we all know that terms like “middle grade,” “young adult” and “new adult” are mostly marketing terms librarians and teachers rely on to discover the suitability of a book for a certain age group, sometimes it trips us up a little when books don’t fall into what we expect those labels to mean. For instance, I was contacted to review this book and passed on it, after reading in the description that it was about a “small undercover unit of hand-picked, trusted warriors” tapped by a Sultan to retrieve a priceless artifact from a group of thieves. The hand-picked warriors are Janissaries, one of whom had been a galley slave, the other a gladiator on the run from the arena. Not middle grade, as far as I was concerned.

I discovered that they’re both sixteen.

Though that still doesn’t make the book scream “middle grades” for me, after reading it I agree that this book is a classic adventure novel which brings to life the brisk trade and treasure era of the Ottoman empire. This novel brought to mind Khlit the Cossack by Harold Lamb and other early romanticized sword-and-calvary adventure novels in the 1920’s-30’s era by S.M. Stirling or Robert Howard which so entranced young readers – and me, as a nerdy late teen, diving into old books. The difference is that while both of these types of story employ historical fantasy, in this novel, there’s a deliberate introduction by the author of the myriad cultures and faiths interacting with England during the Tudor period, and discussion of the religion and philosophy of this period as well. Characters acknowledge their difference and think together about what it all means. Those quiet moments are definitely a departure from the usual. 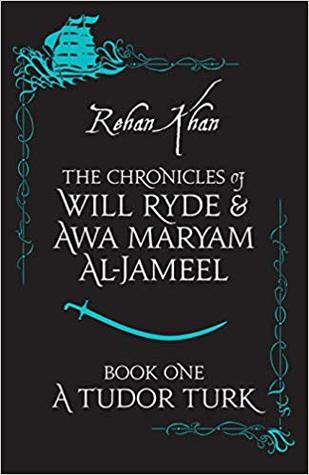 Will Ryde is an English boy who was stolen from his mother in England and taken as a slave. Once the servant of a Moroccan man, he was stolen again by the Portuguese to become a galley slave. When they’re ship is overtaken by the Turkish, Will escapes – at least from the life of a galley slave.

The daughter of a scholar of the Songhai empire of Timbuktu, Ava goes away to war — and discovers that it was not the heroic thing singers and tale-bearers have made of it. Not only are they losing, but death has no glory in it – and Awa is horrified by who she is becoming, in the pursuit of saving her own life, and the lives of the warrior women around her.

Both Awa and Will have myriad scrapes and narrow escapes before running into each other, and joining the quest to return the Sultan’s staff to its “rightful” place at the Topkapı Palace. But both of them have an additional agenda: to go home. Will wants more than anything to return to London – somehow – and see his mother again, and though he struggles with his conscience about deserting from his compatriots, he will do anything and take any gamble to escape. Awa wants to return home to her father, and the calm, orderly world he inhabited. But the years is 1591 they are on Turkish soil, and both of these young soldiers have a long, long way to go.

While this novel tends to be heavier on plot than characterization and emotional resonance, its strongest recommendation will be that it is a strongly drawn, old-fashioned style adventure. Some reviewers have pointed out that there’s a distinct lack of language problems, though Greek, Arabic, Portuguese, English, African, and other cultures and peoples intermix in both the slave galley and the gladiator pits. Still, I expect that detail-oriented and historically minded tweens with a love of history and a quiet space to indulge in a “what if I were…?” type of imaginings will enjoy this. It might be British kids who come to it first, as it’s a part of English history, but I suspect American kids will enjoy it, too.