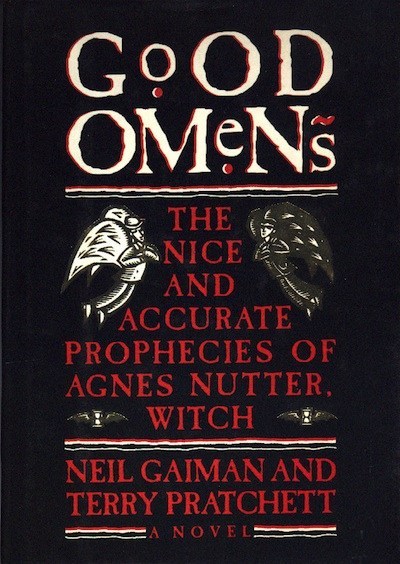 This is a preface to explain what I hope will be a semi-regularly recurring series of posts thanking authors for books that had an indelible effect on me while I was growing up—either as a child or a teen. I eventually settled on “Books That Never Left Me” after considering and rejecting subpar options such as “Books That Touched Me” (ew, no), “Books That Grabbed Me” (same), and “Books That Influenced Me” (yawn).

In most cases, these ARE books that have never left me—they’ve taken up residence in my heart, but there’s also a good chance they’ve continued to take up space on my bookshelves because I can’t bear to part with them. Indeed, for many of these, they require periodic re-reading. Good Omens is one of those books, and I recently gave it a re-read in honor of the upcoming TV series with David Tennant (SQUEEEEEEE). It was one of my favorites in my young adult and early adult years. So, I hereby inscribe my thanks to its esteemed creators. May the honorable Sir Pratchett continue to rest in peace and enjoy this brief missive, even if he is currently a resident of the great…uh…Ankh-Morpork in the sky.

Let’s jump right into it, shall we? Otherwise I’ll have to start this letter with a tedious litany of obsequious and awe-filled blandishments. Let’s just not and say we did. Or just sum them up with another SQUEEEEEEEEEE. That’ll do.

Anyway: I don’t think you’ll ever have any idea how formative Good Omens was for me as a teenager. I first picked it up in high school—I’m pretty sure it was the first book by either of you I’d ever read—and I ended up somewhat obsessively re-reading it several more times over the succeeding years. It was comfort. It was a pick-me-up. It never failed to put a smile on my face, make me laugh out loud, or leave me with a sense of hopeful cynicism and/or cynical hope. It had a profound effect on my sense of humor and deepened an already irreversible Anglophilia. And it fostered a whole new appreciation of riding in the car with my high school friend Matt F., blasting the Best of Queen.

I’d love to be able to say it made me want to become a writer, but how I became a writer is a complicated story for another time. (Or a simple one: I’ve always enjoyed writing. Then at some point, but not right away, I decided to start doing it professionally. Hmm; I guess that wasn’t so hard after all…) I can say that it’s the type of book that immediately takes me back into the mindset of being a reader, that gets me gleefully lost, that not only suspends my disbelief but flings it away, never to be seen again.

So, thank you, from the bottom of my heart.