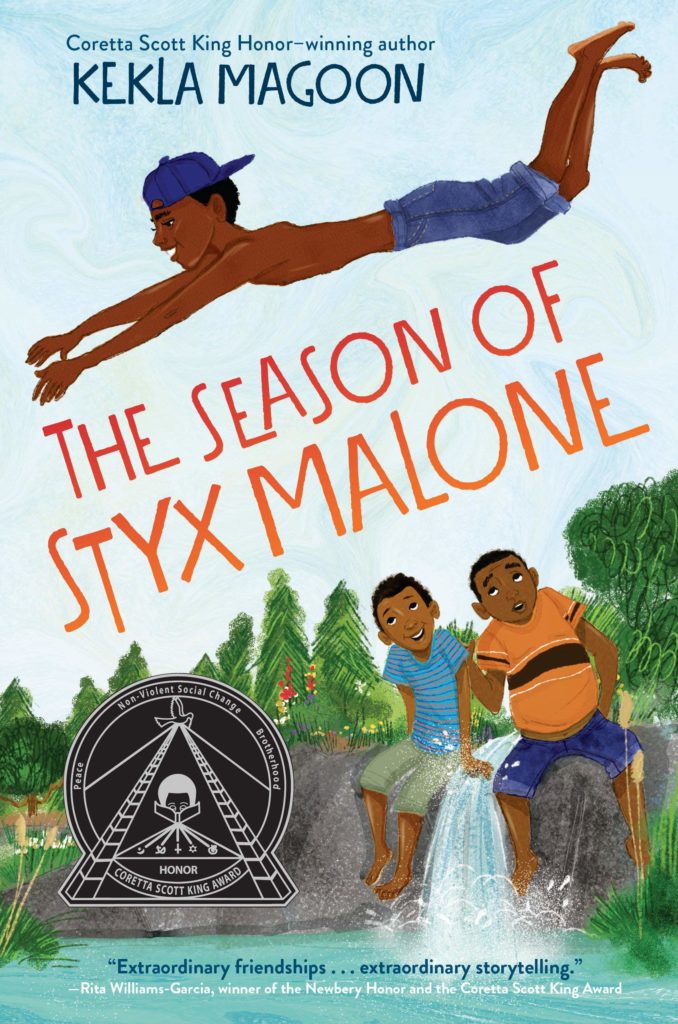 Yes. I would do whatever it took to become Cory Cormier’s right-hand man, doling out fireworks at my whim. I could practically taste the thrill of power.
How would I do it? No idea.

But it turned out not to be so difficult to distinguish myself that night.

As it turned out, Cory Cormier had always wanted a little sister, and we had one to spare.

– from THE SEASON OF STYX MALONE, by Kekla Magoon

At the beginning of fifth grade when I was nine, our new teacher – the first male teacher I’d ever had – started reading aloud from a book series called THE GREAT BRAIN by John D. Fitzgerald. The book was first published in 1967, so it might have seemed weird for kids in the eighties to be so into them, but they were the male protagonist equivalent of the Little House series. The Great Brain is what J.D. calls his brother, Tom, who is basically a con man who gets the two of them into incredible scrapes – but somehow always comes out smelling like a rose.

I loved those books – though, not gonna lie, Tom wore me out, and I wished frequently for his comeuppance. (He really was just a little too unrepentantantly slick.) While these books, with the adorable 70’s era illustrations by Mercer Meyer are a big part of a lot of kids’ childhoods, I often wonder if books about two white boys in Utah in the late 19th century would stand up now, given what I understand about racism and sexism as depicted in children’s books. Fortunately, I don’t have to worry about it. Kekla Magoon has written a modern version of the Great Brain. There’s a new conman in town, boys and girls. His name is Styx Malone.

The SEASON OF STYX MALONE is a ridiculous book – in that way that the ridiculous can be sublime. This particular summer, Caleb Franklin is trouble waiting to happen. He and his older brother, Bobby Gene, are stuck staying close to home in their little town of Sutton, Indiana. Their Dad’s worrying has narrowed their world, and prevented them going on field trips – or even downtown alone. Seething, simmering, popping his buttons and outgrowing his britches, Caleb is ripe for adventure. At first, his friendship with the baby-loving bully, Cory, seems like it’ll be enough to fill his time. But then, he meets Styx.

While Bobby Gene’s gentler nature is faintly recognizing that there are Reasons for things in his and Caleb’s lives, and he’s content to take things more slowly, Caleb is ready to go anywhere, and do anything just to see something other than the same four walls and his backyard. For a boy who fears being ordinary, and is determined to be something different and better, hooking his star to the first new and different kid he meets was bound to happen. Readers will eventually discover that Caleb is as eager – and as gullible – as the Great Brain’s J.D., and as ripe for the picking.

Styx Malone is sixteen to Caleb and Bobby Gene’s ten-eleven-or-twelve, and he is a natural born cool dude. He has the backwards baseball cap. He has the candy cigarettes, the quick fighter’s crouch. He has a particularly cool looking slouch-and-shrug routine. All of his possessions fit in one bag – because you never know when you gotta bounce. He drives – and knows about engines. And hopping freight trains. And getting anywhere he wants to go, under his own steam.

All of this might sound a little… problematic to an adult, but to a boy looking for a hero? Styx is all that.

And a lot of attitude.

Readers are given multiple opportunities to make their own calls about Styx. Caleb is a very …straightforward narrator, telling the reader clearly exactly what’s going on, but jumping immediately into his feelings, which allows him to convince himself of any event’s positive spin. Eventually – maybe more quickly for some than others, and definitely faster than Caleb? – the reader figures out that Styx isn’t always telling the entire truth, and maybe his… ethics are a little gray around the edges. When circumstance, cause and effect finally call a halt to the shenanigans – well after Caleb and Bobby Gene’s parents are over the whole thing – Caleb is left with his heart hanging on his sleeve – and Styx is left alone. Like he always has believed he will be.

For three boys who had begun to click like brothers, this is unthinkable. And the two generous-hearted Franklin boys, and their parents, do what they can to open their hearts, and make sure that Styx doesn’t have to run one last con to be loved.

This is …a funny, fast-paced book that isn’t all that serious, in some ways, but in other ways is about dealing with fear of disaster, and coming through it, holding on to each other. I suspect my nephew is going to love this one, too.