Greetings, readers and writers! It’s been a while since my last posted review, and I am woefully behind simply on tracking my reading, let alone writing reviews of anything. Lots of travel this year has really hampered my remaining time and energy, and of course there’s work, and family commitments, and mental health, and all of the miscellaneous life stuff that creeps in through the cracks like pesky roaches that take up residence in your unused garage drainpipe and leave poop on your garage shelves (OH DID THAT HAPPEN? YES IT DID!).

ANYWAY. I did want to at least mention a few highlights of my reading list from spring and early summer, because this year is zooming by. Soon enough it’ll be fall—my favorite season—and things will be ramping up with school starting and Cybils getting underway. So, without further delay, What I Read On My Summer (and Late Spring) Vacation. 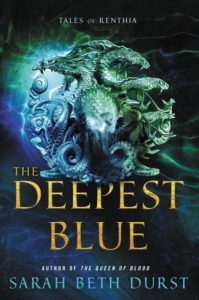 First, and most egregiously overdue, is The Deepest Blue by Sarah Beth Durst, the most recent novel tied to her Queens of Renthia series. Not strictly YA, this series (and its companion books) make excellent crossover books for teens who read a lot of fantasy. I would have loved them growing up, and I love them now! I received my review copy of this courtesy of the author, far too many months ago now to be anything but embarrassing, and I sincerely apologize for that.

This book, a companion to the main series, takes place on the Islands of Belene, where the would-be Queen must survive the deadly Island of Testing to become heir—or live in silent exile if she fails or refuses the call. Mayara, an oyster diver, is happy with her life and keeps her power over the ferocious nature spirits hidden, until she is forced to use them to save her village from a storm. Her powers now revealed, her fate is sealed: she’s taken to be tested. While this one has some of the Hunger-Games-like excitement of a testing situation, there’s so much more to the story—and, as often happens with Durst’s books, the ultimate resolution challenges the idea that gaining power means losing yourself. Fans of the other Queens of Renthia books won’t want to miss this one. 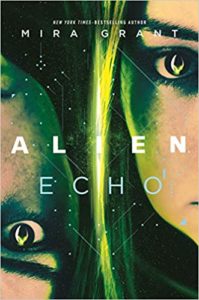 Yeah, so earlier this summer I accidentally read an Alien tie-in novel. How did I “accidentally” read it, you ask? Well, it was simple. I failed to notice the punctuation in the title of Alien: Echo, but at the same time I did notice it was written by Mira Grant (aka Seanan McGuire), and had a rather exciting plot with sci-fi exploration, action, and an imaginative new world. As I began reading this tale—in which Olivia and her sickly twin sister Viola settle in on an alien world with their xenobiologist parents—I peered more closely at the descriptions of the frightening alien creatures and thought, “gee, this sure owes a lot to the Aliens franchise.” Massive Attentiveness Fail! What a dork. In any case, it was a fast-paced, entertaining read, and anyone who enjoys a good space adventure might want to give it a try.

I also went post-apocalyptic for a while, with a new series (The Last 8 by Laura Pohl), a new-to-me series (The Darkest Minds by Alexandra Bracken), and a new book in an existing series I like, Broken Lands, which is the latest Rot & Ruin book by Jonathan Maberry. While post-apocalyptic, each has a different fantastical focus: The Last 8 has aliens, The Darkest Minds has psychic powers, and Broken Lands, of course, has zombies. All were quick, fun reads, and took my mind off the actual ways in which we are all hurtling toward possible oblivion. 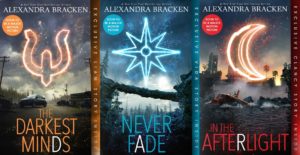 That’s it for this post—and it’s plenty. There will be more to come, to be sure. The only question is when…and it’s a very good question…