It’s a little silly to choose a book solely based on the painting of the Chrestomanci-style wizard over the fireplace on its cover – so I didn’t. I chose this book because Caroline Stevermer, together with Patricia C. Wrede, wrote THE ENCHANTED CHOCOLATE POT, THE GRANDE TOUR, and THE MISLAID MAGICIAN. Those were some of my favorite lighthearted historical fantasy series for younger YA readers, and so I’ve periodically checked in with Caroline Stevermer to see what she’s up to… and she’s got a new books out! But, before I read that one, I needed to catch up with what I’d missed. 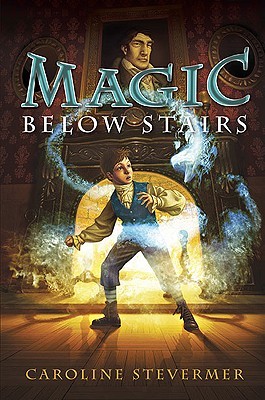 Through events that he doesn’t remember, though he’s been told it’s because his mother died in childbirth, Franklin Lincoln has been an orphan for as long as he knows. Like other Stevermer novels, Franklin is in a version of Victorian England, and does his best with the hand he’s dealt – which is a particularly nasty one, as helping out in the kitchen has earned him the vicious attentions of the master, who, in return for Franklin working out a means of getting extra potato peels has been helping the cook peel… which is against the rules. When Franklin somehow miraculously comes through his nasty punishment unscathed, with only the vague memory of a humming little green man, Franklin is obscurely comforted by the strange memory, but hasn’t a clue.

In time, Franklin’s luck changes – fitting better than anyone else into a suit of livery when the servant of a great wizard comes calling – in sort of a weird Cinderella-and-the-shoe scenario that actually sounds factual for Victorian England in real life – Franklin begins to work for the terrifying Lord Schofield. His cleaning is so precise and good, and his cravat-tying is so spot on, that the Lord takes a close interest in Franklin – and discovers in doing so that Franklin has his own personal brownie. Billy Bly has been with Franklin since the orphanage. Of course, a wizard can’t have a brownie wandering the place – no, indeed. Billy is banished… but when the family moves out of London for the summer, to the great country house which was so recently cursed, Franklin – and Lord Schofield – will need all the help from every friendly brownie, wizard, and valet they can get.

This was a fun book, but it definitely was written for younger middle grade readers, without the trademark wit and humor of Stevermer’s YA books. That said, I get a distinct Diana Wynn Jones vibe here, and I’m hopeful she’ll create more books in this world – Stevemer’s style of storytelling, while about a magical incident or two, really is more about Victoriana. Readers will come away knowing a great deal about how households were run back in Ye Olden Tymes, and will probably be grateful for their beetle-free, cozy, temperature-controlled lives – and their store-bought clothes. All in all a fun read, and good for history-loving middle graders.