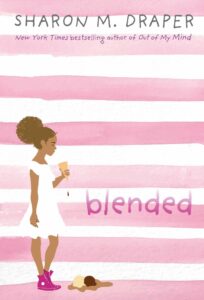 I think this was one of the prettiest covers of 2018 – the ice cream, the pastel gradient stripes – it was all so lovely. Discovering that the main character, Isabella, was a competitive pianist was neat – there aren’t as many novels which depict Black girls as being interested in the arts. But, then, she’s not only Black – she’s blended. Mixed. Biracial.

Though being biracial is one of Isabella’s identities, this is a novel mainly about her main one – being a child of divorce. Isabella is stretched across two homes, two families, and two vastly different ethnic and socioeconomic cultures that clash, producing one very stressed out girl. Isabella’s happy with both parents and their new partners – though sometimes she’s Izzy, and other times, she’s Isabella. She knows there are two different people who look to her from two different perspectives, but both perspectives are filtered through and filled with love. Still, it’s just a LOT to switch back and forth from week to week, a wobbling metronome, trying to get where she needs to go and not fall down on her schoolwork, her piano practicing – whether on the baby grand at her Dad’s house or the Casio keyboard at the Waffle House while Mom’s working. It doesn’t help that the longer they’ve been divorced, the more Mom and Dad’s epic arguments escalate. Being late to the weekly handoff – deliberately or accidentally – doesn’t help, and her parents escalate their passive-aggression until their scheming and shouting actually overshadow their view of their child. They do pull it together eventually, but wow.

As a sixth grader, Isabella’s got reams of schoolwork and vocabulary words to work on. As an adolescent, she has her own issues of change going on. Her friends and friendships are changing, too. Who is she today? Sometimes even she doesn’t know. The problem is, biracial kids live in a world only too happy to define them – to choose their side FOR them, to tell them who they are based on what society perceives their “side” to be. There are always people who have An Opinion and are only too happy to share. The tragedy in this book is that the eyes of the world which define her in the worst instance, the eyes of authority, and despite being a child, Isabella still pays.

The ending of this novel was unexpected – but it shouldn’t have been. I’ve mentioned before Sharon Draper’s knack for just… candidly putting a thought out there, and just… leaving the reader to sit with it. The word with which I came away from this book was “disquieting.” The ugly realities of divorce, socioeconomic inequality, aggression, gun violence and loss are just placed on the table, available for the reader to think about deeply, and perhaps begin a conversation. If that was the author’s intent, she has once again ably achieved her objective.