Content Warning: This book deals with the assault a young child and witnesses the impact it has on her life at age 12.

This is me, afraid
of falling asleep, getting
stuck in a nightmare

Almost every Coe Booth book makes me cry a little – even a tearing up, laugh/cry kind of thing. She finds ways to write the truth in such a deliberate, thorough way that it really resonates with the reader. This feels to me like such an important book – because it shows what happens if The Worst happens — that Worst that your parents fear and that you’re warned about constantly if you’re a girl. The Worst happens, and she tells the truth — and she is believed, she is loved, and the world doesn’t end. That non-ending is hopeful and cathartic.

Caprice is lucky – she got into the Ainsley International School for their seven week summer intensive, and it was amazing. An all-girl student body, innovative teachers, and a great roommate. It was seven weeks that changed her life — until the last night, when they had a dance with the boys’ school across the way. Caprice’s panic attack scared her roommate, got her a call from the school counselor, and left her feeling afraid. She’s determined to hold it together, to not break, to not let the past affect the future. She’s certain if she just goes home, everything will be fine. 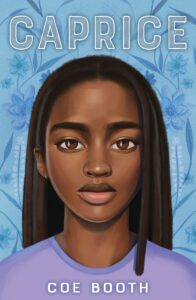 But home is suddenly an uncomfortable fit. Her best friend, Nicole, is the same as always, persistent with her interest in makeup and her constant talk of her boyfriend, but it feels different now – it chafes. Caprice isn’t unaware of the boy who is interested in her, but just walking next to him gets all eyes on her – and she realizes how little she wants those eyes. Everything feels heightened and intense, the catcalling of grown men makes her throw up. She’s aware again that breaking once means that fault lines have been formed – and that she could break again. As the book continues, the author seeds little clues that grow to be bigger and bigger, tying together the past and the present into one chaotic, and unsolved mystery: Why? How could family – who’s supposed to love and protect you – do that? Allow that?

Her grandmother’s illness draws Caprice relentlessly back toward the place where it all began – and only when she’s back there does the story unfold as it should: a terrible thing happened – but justice is served.

This is a tough book – yet not hard to read in many ways. Caprice has a lot of “normal” stuff going on, with friends and her parents trying to keep their business afloat, and all. But the way that the impact of her assault weaves in and out of her life, even when she’s not actively, consciously thinking about it resonates so realistically. Readers are called to bear witness to her pain, but also to her strength. And even though this may make you weep, it will also make you finally breathe a sigh of relief that one wrong thing is beginning to be made right.

I hate saying books are “important” or “brave” but this is truthfully both for people who have survived similar abuse. It is important to take note of how brave it makes you feel – and if necessary, hold onto that bravery and act.