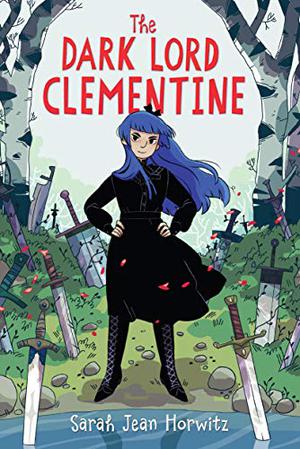 I chose this book based solely on the title (and I thought it was a graphic novel. It’s not). Clementine is a tangerine-colored name, with bubbles and sparkles. (At worst, it’s something to do with a prospector’s daughter and her big feet – but we’ll draw a veil over that awful song with it’s “dreadful sorries.”) The words “Clementine” and “Dark Lord” really shouldn’t go together. And, yet: Clementine’s father is the Dark Lord of Castle Brack. He is Terrible to the people of the village. Boys spit – well away from him – when he comes to town. Girls are terrified of him, and by extension, of Clementine as well. Adults bow and scrape because the Dark Lord Elithor Morcerous is a force to be reckoned with.

Deep in her deepest hear of hearts, sometimes Clementine wishes she could just hang out with the village children. And grow flowers. And sit in the sun. And make noise! And make wishes that came true! And meet a Unicorn! But — that’s Not Done when you’re a Dark Lord in training. Clementine is her father’s only heir. She knows her Duty, and she knows it well. Duty is boring and hard and …lonely.

When her father falls ill with a really odd and degenerative curse, Clementine really does try her best. Only, once her father’s “condition” is clear, and the castle’s clever sorceries and its silent servants freeze in place …and then the black sheep starts talking, and she sees the boys in the village almost mob a poor woman with a scarred face, Clementine realizes how fragile things are. Without her father, her home in Castle Brack is insecure… and without help, her father is going to die. And, though he is always critical and scolds and requires absolute silence from her in the house, and though she sometimes wishes very much he would at least once say she is an okay kid, and that he likes having her around, he is her Father, and she very much doesn’t want him to die – especially not as a victim of the Whittle Witch. But, there’s nothing she can do — revealing a weakness and asking for help is a sure way to have someone come and take the castle – kill her father, and possibly her. The Council of Evil Overlords is no help at all – they simply demand greater and greater Dastardly Deeds, and proof of them, quarterly – on pain of death, and getting the castle taken away.

When the Whittle Witch comes to call, all Clementine has to depend on is …herself. And a few scrawny “knights” from the village, a black sheep, a water sprite, and her own courage, clung to with both hands.

This is book taking a good poke at the traditional fantasy story – with a bit of wordplay and clever dialogue. There’s a bit more depth as the book goes deeper – and Duty becomes something more like ethics and Doing The Right Thing, and demanding others to help becomes more like relying on friends, trusting them, and forgiving them when necessary. Readers looking for just a funny story will come away with a thoughtful narrative with a bit more meat on its bones.