I’ve been looking forward to getting into this book because I read an interview by the author, in which she answered a question about an “unlikable” protagonist. I have to admit that after having read the book, I guess I can see where the person was coming from… kind of? But really, what does “unlikable” mean?

Will Orser is… not a people person. He’s a thing person, and his thing is grammar and usage. Of course, few of us come by our “things” on our own; as college professors, language was Will’s parents’ thing… widowed when Will was four, and now the victim of a debilitating stroke, Will mother is no longer able to live the life of the mind, which is where she and Will connected. 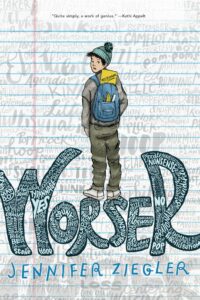 At their best, Will and his mother were a team — and he never felt the lack of a father much. He didn’t see his mother as depressed – he was just used to the untidy house, the lack of clean clothes or new clothes. He was used to the paper thin towels in the shower. Life was his mother grading stacks of paper, getting takeout, and fending for himself. It was his normal.

What’s not normal to Will is his aunt wafting in with incense and hippie art. She’s all color and bangles and finger painting and affirmations. She’s not just positive and bubbly, she’s a living exclamation point, emotional and apt to break into nonsense song. She wears Will out and justifiably works his nerves. Critical of the state of the house, the state of Will’s room and the general dishevelment of dead houseplants and old newspapers, she sweeps in with cleanliness. She is wildly different from his mother and a blatant, constant reminder to him that since her stroke every single thing about his life has changed.

Will can’t stand how his mother has changed. Non-verbal and passive, she wears the bright clothes his aunt puts her in, and shuffles along behind her like a child. Will begins to avoid being in the same room with her, unable to bear seeing her at all. The more out of control he feels, the more barriers he builds in his head, creating more definitions for his 300-page Masterwork lexicon. It’s the only way he feels calm. Language is the structure of society, what separates us from the animals. It’s not feelings. It’s not ABOUT feelings, no matter what his aunt might say.

When budget cuts close the school library, Will’s after-school refuge is destroyed. He can’t always hide in the treehouse he’s found, so when he finds a used bookstore he makes an agreement with the owner to hang out. Eventually Will opens his refuge up to a crush and her literary club, eventually earning a tiny bit of social acceptance and the beginnings of new friendships. But, he cannot control everything, and the chaotic nature of the world brings change into his life again. This time, the change overwhelms Will – but the fragile bonds of friendship he’s developed are there to pull him back one more time.

Is Will Orser an unlikable protagonist? No… I never found myself really disliking him, and the author introduces so many subtle clues to help us understand him that instead of being disgusted with him, we’re Team Worder all the way through. And that, friends, is how it’s done.