This was another 2020 middle grade book I missed out on. Set in a small village in modern Nigeria, it has a solid flavor of Nigeria in terms of food descriptions, style of speaking, and setting. It also has corruption, descriptively-named but real villains… and the humiliation of losing money and security after the harrowing and violent loss of a parent through murder. 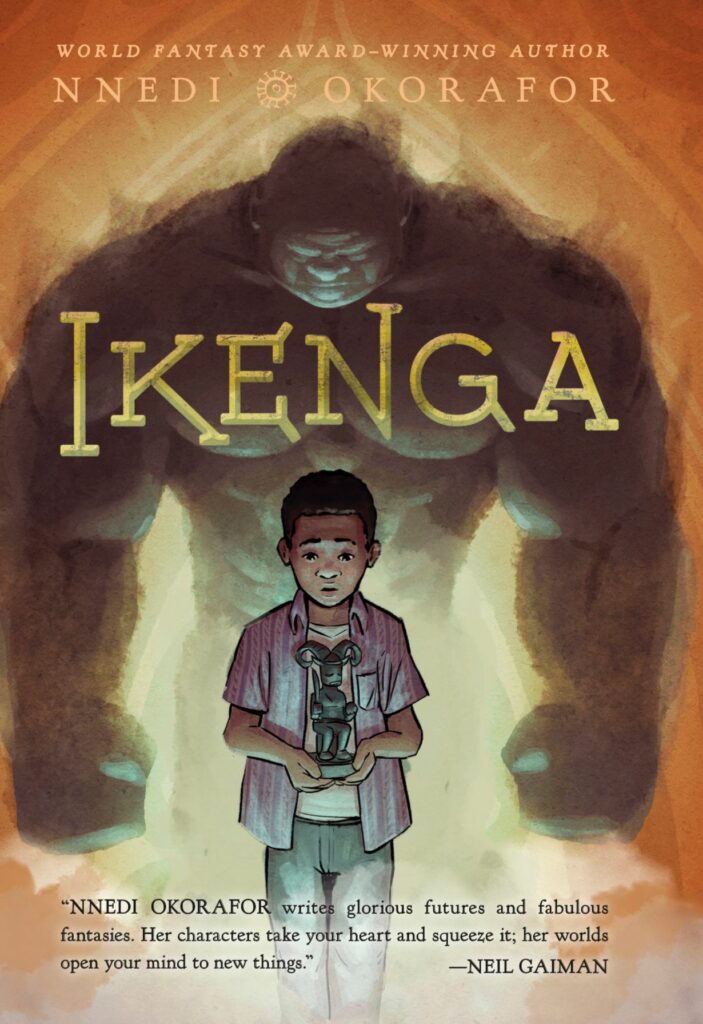 Nnamdi’s father was the best police chief the town of Kaleria had ever seen. When he is murdered, his only son has nothing left but a memory of strength and kindness, and all that the man had wanted to accomplish. Facing the realities of no longer being the police chief’s wife, but being a woman who grows and sells tapioca root in the market, Nnamdi’s mother’s body pays the price she sacrifices to keep their heads above water. In his grief, Nnamdi finds his old friends obnoxious, and the adults who mouth platitudes hateful. When he thinks he sees his father outside his own memorial service, he chases him into the night… A ghost-form of his father returns to him and gives him an ikenga figure.

I was intrigued that ikenga are real. These little figurines are power symbols put in personal shrines by the indigenous Igbo people of southern and southeastern Nigeria. They are the personification of physical, temporal strength, as well as success. The first time Nnamdi hears someone crying out after he receives the figurine, he races to help. Unlike the green-skinned Hulk, our brown-skinned Nnamdi turns into a hulking, night-skinned monster called “The Man” less out of anger and more from fear that someone is being hurt. Once he discovers what he’s capable of, though – look out.

Though he tries to side-step his internal self, the out-of-control fury that causes him to smack around villains and classmates alike, Nnamdi knows it’s his OWN baggage he’s carrying, his own sense of powerlessness he’s battling. But, how to overcome his rage at the complicity of an injustice and corrupt nation in the death of his father, his safe childhood, and his dreams? That’s where this story goes beyond the simple Bruce Banner retread, and into greater nuance. Nnamdi’s still a twelve-year-old kid who is both horrified and fascinated by what he becomes. Part of his struggle is to straddle two worlds – one with traditional, indigenous Igbo beliefs, and the other with Western Christian beliefs. Okorafor allows Nnamdi uncles, classmates, and friends – an especially big-hearted and not easily crushed Chioma is my favorite – to act as wise guides as he moves through the destructive phases of grief and growing. As Chioma says, “It’s not about the answers to a riddle; it’s about what you learn by solving it.” By the book’s close, Nnamdi has confronted both his fears and his nemeses, and has begun the work of regaining the selfhood which enables him to stay true to himself, and commit to doing the ethical, moral, and right thing, whether he has the power to beat the snot out of mere mortal villains or not.