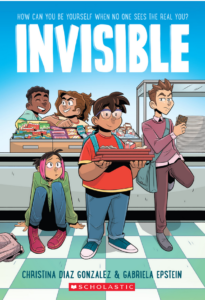 I enjoy the challenge of reading bilingual picture books right now as I nurture along my fledgling Spanish, Dutch and German skills, but I wasn’t expecting to discover Spanish and English in side-by-side cartoon bubbles in Christina Diaz Gonzalez’s latest graphic novel for middle graders. It was a fun surprise that I was able to mostly follow along. I hope this means of creating a bilingual text catches on for more graphic novels; having a line-for-line translation right there is a really quick way to reinforce language skills with together with the bright, blocky illustrations really enhances the storytelling.

I read that this novel could be described as The Breakfast Club meets middle grade… and I kind of had to laugh. The novel opens with five kids in the principal’s office… and gives you the immediate vibe that these are five kids who are in trouble, and are five kids who are seen as tropes or stereotypes rather than kids. The well-meaning but rather dim adults in charge have given them a community service project like everyone at their middle school gets… but these guys have been pulled into a SPECIAL community service group with “kids like them.” Rather than doing anything super meaningful, they’re put under the supervision of a cranky cafeteria worker who has them cleaning up trays and trash policing the dining room and field around the cafeteria. They hate it, and at first, they’re not all that fond of each other. Each of them has varying levels of Spanish language – and some of their cultural differences make communication a bit difficult. And, rather than being kids “like” each other, these five are nothing alike. 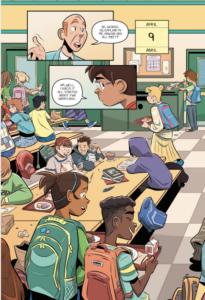 The main narrator, Jorge, is a scholastic boss, and Puerto Rican. Sara, the quiet loner with dyed hair is Mexican. The athletic kid, Miguel, is Dominican. The rich boy, Nico, is Venezuelan. The trouble-maker, Dayara, is Cuban – and determined not to let anyone get in her way. Each of these students is carrying their own weight, and dealing with their own stuff. In a thousand ways, they’re nothing alike, but when they meet another family on the other side of the fence from the school who is having their own troubles, their responses are remarkably the same. They want to help.

Unfortunately, there are a few things against them… most notably the dim adults in the room. The lady with whom they’re meant to be working has it out for them, and is all too ready to snoop and accuse them of… something. After all, they’re KIDS. Kids are always up to something, right? And yet, in their own, youthful and ignorant way, Jorge, Sara, Nico, Miguel, and Daraya show compassion and understanding for a situation that is nothing like their own – but could have been theirs, if the wheel of fortune had spun another direction. Their reaching out both change them, and allows them to see each other more clearly… as real people, and not the assumptions they had made about each other. 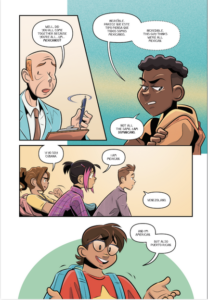 There’s more to any story of who we are than the language we speak, the country we’re from, and the culture we embrace, of course. None of that matters so much as the way we conduct ourselves, and the spirit we bring into the world. Even when nobody is looking at us – and when we think we’re unseen and invisible, who we are, and how we act… matters. Who we are when no one’s watching tells our true story.