“Do they really feel this way about us?” Yusuf whispered. “I thought this was our home.”

Danial patted him on the shoulder. “Sorry, dude. The truth hurts.”

I have the privilege of joining this and other authors on September 21, 2021 to talk books – and I wanted to read it and planned especially to review it today, September 10th. Tomorrow it will have been twenty years ago that murderous people dropped bombs on the U.S. Capitol and in New York, the twenty-year anniversary of September 11, 2001.

Most people in the U.S. alive during that time remember the day. For me, it was a really disorienting – on the West Coast, for a while it felt like it was only something that had happened in New York. We didn’t all realize it was something that wasn’t just – a terrible mistake, an accident, a plane crash. And then the facts solidified, and the wider implications begin to ripple out, and we all collapsed onto each other like puppets with our strings cut. The sick sense of shock and dislocation was intense.

And then came the jingoism and the hate. Just. That. Fast. 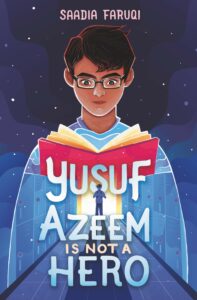 Yusuf Azeem is a sixth-grader who has just come through a bad time. He survived fifth grade during Covid, but lost his grandpa. He is hoping to just get back to normal for grade six. He’s excited about starting middle school, having a Chromebook, a locker, and joining the robotics club. He just wants what any kid wants – to hang with friends, to not have to study too hard, and to have fun. But, his very first day of school he’s greeted with a nasty note stuck in his locker, and things go downhill from there.

All over campus are signs that say “Never Forget” and it seems the closer it comes to the eleventh of September, the harder the community of Frey, Texas, where Yusuf lives, strives to recreate the awful time just after the towers fell. A group of people he’s known – patrons of his Dad’s store, teachers at his school – come together to form a group called Sons of Patriots. They’re acting like they’ve never met Yusuf and his family before, like they’re total strangers who would maybe bomb something… maybe kill someone. And Yusuf and his family and Muslim community are in the middle. Suddenly, adults seem to not know what to do or say when other adults do hateful things, like stand with picket signs on the construction site of the new mosque. Teachers seem unsure how to respond when a bully hectors Muslim students, and does real harm. How can Yusuf’s Abba talk about love conquering all? How can the Koran say so much about God not giving people more than they can bear? Is any of this true? How can everyone just… ignore the bullies, like they’re just going to get better and go away by themselves?

Yusuf Azeem isn’t a hero. He’s young, a bit geeky, and scared out of his mind. But he stands up anyway — because that is what heroes do.

While I basically cried from the middle of the book ’til the end, young readers who didn’t live through 2001 won’t find it sad, but instead they’ll read an edge-of-your-seat nerve-wracking, infuriating, and provoking of righteous indignation story. The secondary storyline of the robotics competition also creates a compelling page-turner as well – coding and building robots is hard work, and it’s even harder when people mistake the electronic components in your backpack for something else. Yusuf, his parents, and his community have a lot to face. It’s not easy not to fight against bullies when you’re also bickering with each other when everyone is so stressed and unhappy. But, Yusuf perseveres – and standing up and speaking out against those who think everyone will just go along with their bullying ways is what saves him. Even when everyone around you is screaming at you to just bite your tongue and take it, sometimes shouting, “ENOUGH” is the right thing to do – and sometimes speaking up is enough to change an entire community.

I think Saadia Faruqi might be on to something.