Though most don’t realize, the average middle grader is friends with at least one kid whose parents are on assistance of some sort, or whose families are currently facing hard times – a lost parent, a lost job, bill collections calls, food insecurity, or difficulty meeting rent or car payments. The latest census shows that one in six kids lives in poverty in the U.S. Especially since the pandemic has so impacted capitalism and how we live and work within that system, the probability of knowing someone in dire straits has intensified, making this book both useful and vital to classroom bookshelves. The theme that where you’ve come from doesn’t have to shape where you’re going is timely as well. 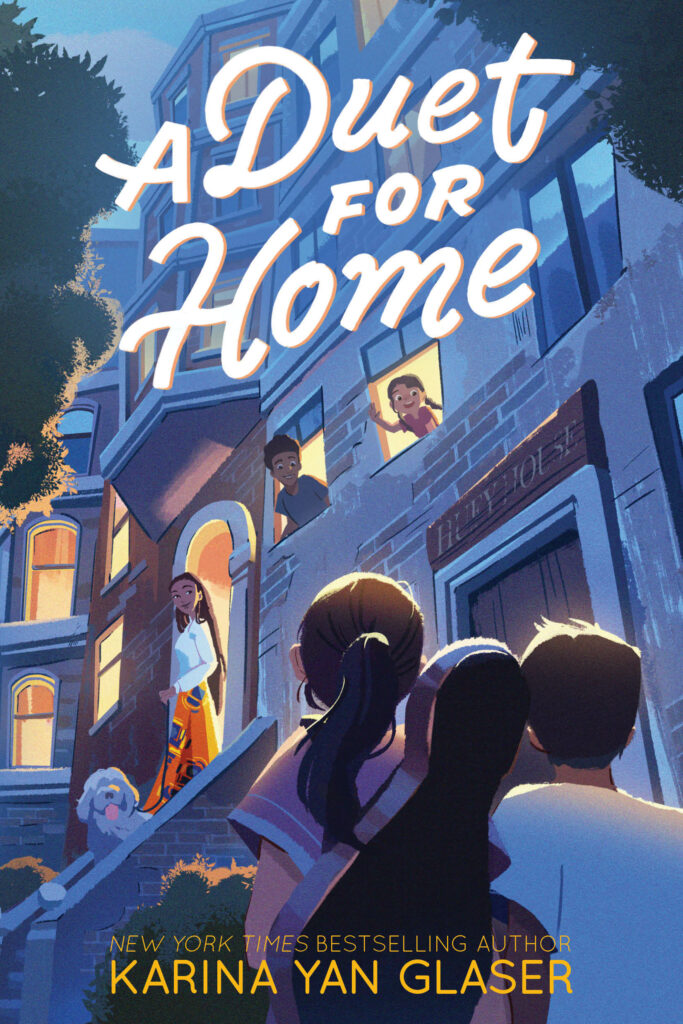 The cover and title don’t immediately give it away, but the two voices in the story, sixth graders Tyrell and June (or Juniperi) are living in a homeless shelter in New York City. June’s entire family – June, little (dog-obsessed) sister Maybelle, and their silent mother – have all just moved in, while Tyrell and his mother have been there for three years. Each chapter begins with a count of days of how long they’ve been at Huey House.

June struggles at Huey House at first. Her first meeting with Tyrell leaves her stained with cranberry juice and her sister crying. As she has for the last six months, June’s mother lies in bed with her face to the wall, silent. Worst of all, June’s not allowed to have her precious viola at Huey House – because instruments are noisy, and the director doesn’t want noisy.

Tyrell and his friend Jeremiah mostly keep their heads down, do their homework, and complete their (mostly) harmless pranks. New people and new volunteers from the City come and it go, but the boys just have to keep to their plan – to turn eighteen, get jobs and find an apartment together. Then Tyrell’s mother, who burns through money and can’t keep a job, won’t be an issue anymore.

As Tyrell makes an effort to make things up with June, and soon the two begin a friendship based on a shared interest in classical music, Tyrell’s ability to find hiding places in the building, and June’s ability to try something new. Of course, life hands these narrators a few changes and challenges; both Tyrell and June experience what it’s like for people to not see them as people but simply as homeless people and/or minorities. They both experience losses in the home, as people sometimes move out – or are taken away by other government agencies. When the Mayor’s office has a “great new idea” for rehousing the homeless that puts them miles away from transportation, good school districts and decent grocery stores, Huey House begins to change – and not for the better. As calls to the mayor’s office go unanswered, Huey House speaks truth to power as best it can.

Being unhoused is no picnic, and book makes that clear. It is, in some ways a tragic story, but it also one that has glimpses of humor and strength. Taking part in a protest when they feel powerless and unseen is a brave thing for the residents of Huey House to do, and will be thought-provoking to readers who find themselves in the same place. June and Tyrell are very much like other middle grade characters, which I think will be both surprising and sobering to readers. It’s important to walk in these kids’ shoes and think “they are just like me.”