Seven Salazar is fortunate to have really cool parents; they’re mellow and don’t get too worked up about things in their town of Ravenskill. Things like the Black Moon Ceremony where witch cohorts are chosen – kind of like a Potter-adjacent sorting hat, but with less input from the witches in question – are just going to turn out how they’re supposed to, though Seven cannot stop stressing about it. Witches who aren’t chosen to be part of a Coven are known as Spares, and a Spare in Ravenskill is an unlucky, unfortunate person who ends up doing all the dirty work. Somehow, though having a Spare to help out used to be a good thing, now Spares are ostracized and those without anyone to speak for them are essentially treated as slaves.

As it turns out, Seven was right to be worried. She, her bullying nemesis Valley Pepperhorn, and a timid new girl called Thorn La Roux all end up being this year’s Black Moon Spares. Seeing all her dreams slipping away from her, Seven invokes an old rule and requests an Impossible Feat so that she can have another chance. Her request is granted – but she has to work with scared Thorn and rich, know-it-all Valley, the Impossible Feat really IS impossible for a trio of kids, and the stakes are a lot higher than anyone expected, when a child-eating Nightbeast is stalking her brother. 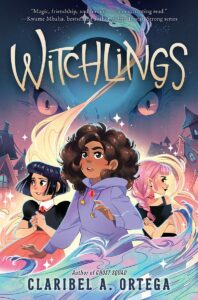 All of these things seem like they’d combine to make a traditional adventure novel – the plucky heroine gathering her troops and saving the day and all, but the author takes things deeper. Seven questions why the adults are making the kids solve the problems of a whole town — which rarely happens in children’s fantasy. Seven also looks at herself when she’s impatient and snarky with Valley, and figures out that some of the issues with their constant fighting (and Thorn’s weeping) are…her fault. Ravenskill’s economic inequities with regard to the Spares lead Seven to question the town’s calm acceptance of the status quo. And while Valley is rich, finding out that not everything is sunshine and quick spells in the house up the hill is an eye-opener for Seven, and possibly for many readers. Some of Seven’s courage is, of course, used to kill Nightbeasts and attempt spells above her skill limit, but the rest is useful for everyday stuff, like telling someone she trusts when she thinks an adult is hurting a child, and that child is going to hate her forever for telling.

With a surname like Salazar we had a 50/50 chance of Seven being of Latin descent, and she definitely reads that way. Delightfully, the magic words ARE Spanish, or at least have Spanish roots. I felt like *I* could almost do spells in that world, and I imagine that was a treat for ACTUAL Spanish speakers. I was happy to see the cover carried over the Latina theme with a brown-skinned heroine with dark hair – big dark hair, too. Illustrator Lissy Marlin did an amazing job.

All in all this book leads the reader in with the familiar, and then keeps the surprises coming – with higher stakes and more heart than expected. Seven does. not. give. up. on her dreams and eventually, she becomes A Real With With A Coven, because her grit sees her through. I read this in a single intense sitting – and think even for kids who weren’t allowed to read “witch” books growing up, this one’s worth getting in trouble.