“I did then what I knew how to do.
Now that I know better, I do better.” – Maya Angelou

(I apologize in advance for the earworm, but you can blame the book.)

Ostensibly, this novel is about a middle grade P.E. class, and how one Lupe Wong doesn’t want to participate. (The title in Spanish makes me laugh, it’s so definite – Lupe Wong No Baila – like, not ever, period. Somehow that NO is more certain than the tamer English “Won’t.”) If this were all the novel would be about, it would certainly be… short. Instead we are introduced to Lupe Wong and her surface joys – baseball, pitching, and Dr. Who; her friends who are either ethnic minorities, uniquely niche or neurodivergent; and her nemeses. The author slowly reveals Lupe’s secrets and sorrows, and the reader learns about her inability to blend in – Chinese and Mexican means she’s always going to stick out, and she has no one standardized “bubble” to fill in on any test – and why she tries so hard to fight for anything she believes in. Lupe’s both one thing and another, and she’s used to navigating that… but junior high stakes make it especially tough. As a physical, active person, P.E. is the one place Lupe usually shines. But now her automatic-A, safe haven, easy class is all about a.) dancing, b.) hoedown style country dancing, and c.) a boys-ask-girls couples dancing which d.) culminates in the best students dancing on stage – and getting an automatic A. Lupe craves that A for her own goals – she’s been promised a trip to meet Major League baseball player Fu Li Hernandez, who is mixed race Chinese Mexican like her, but she could do without dancing on stage. Dancing hoedown style. Dancing with boys asking her. Dancing …pretty much altogether. 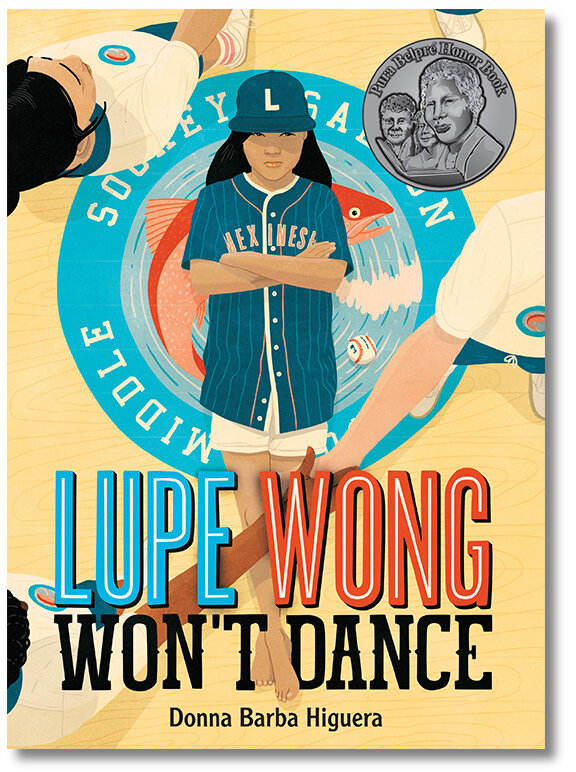 As Lupe tries to enlist adults to eradicate the horror of the hoedown from her middle school experience, she discovers that NO adult agrees with her. While each cringes and laughs at their own memories of the horror, each of them grudgingly admits that thought they hated it, the weight of tradition was against them getting out of square dancing — and each of them tells Lupe she won’t escape either.

Lupe basically sets out to prove them wrong. She loses sight of anything but her goal along the way… to her detriment. It’s a tough, painful road sometimes, but in the end, though (SPOILER ALERT) square dancing still exists, her perception is changed.

This novel is brilliant, and while it’s funny and painful and all the things that junior high also tends to be, there’s also a part which might make you weep – be warned. That bit of heart might just be why this was a Pura Bela Honor book..

One of the things explored in this book is normalizing things. The adults normalize the horror of square dancing. Partnered dances in the Sadie Hawkins vein of things tends to be heteronormative. Square dancing itself has both modernized and normalized some really racist music. I love this book’s subtle message of “just because we’ve always done it this way doesn’t mean we need to continue.” Lupe spends a lot of time getting in her own way, but eventually learns that a.) SHE needs to change some of the ways she does things and b.) that SHE is changing, whether she wants to or not. In spite of everyone’s best efforts, middle school doesn’t really allow for life to be static, and life is long and FULL of changes. Perhaps someday not only will Lupe be the first woman to pitch for the Major Leagues, but she’ll continue to change things around her. After the way in which she opens the eyes of her community – and of herself – to the history and present going on around them, readers come away feeling that once anyone knows better, everyone can do better.