As evinced by the height of you, I am not a reader in any hurry to face reality.

Diana Wynne Jones died in 2011. Her final, unfinished book, written in part by her sister, Ursula Jones, was published a mere three years later. The book, The Islands of Chaldea, has been something I didn’t want to read, as it was The Last, The End, and no more.

To be honest, I tricked myself into forgetting about it — which was my goal. So, it was with unalloyed pleasure that I sat down to read a book I’d never seen – with DWJ’s name splashed proudly atop the cover… and her sister’s name much smaller, on the very bottom.

I’d seen earlier copies – or maybe earlier British copies. Ursula’s name was prominent, and that wouldn’t have sold it for me. Notwithstanding that the woman is a playwright, picture book author and actress in her own right – she’s not a household name on this side of the pond. Still, no matter how good it made me feel to read Diana’s name first, it must feel odd to be named merely as DWJ’s Sister. I wonder, now, how Ursula would have made the book different.

I certainly sense that it’s a traditional, typical DWJ story. It’s part screwball adventure, part magical quest narrative. There are donkeys – occasionally mobs of them. There is a quite ugly magical cat. There are mishaps and a best beloved who acts like a total donkey end himself, who, quite rightly, is no longer the object d’affection by journey’s end. There are very European types of country details – from a pseudo Scotland to a pseudo Italy. 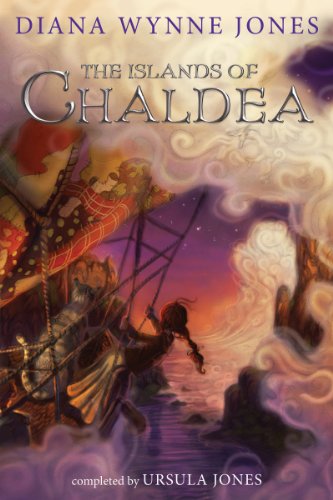 Oddly, despite that, there are not really people who are different from British people, for the most part. Diana Wynne Jones’ books were not at all focused on representation — not only because very few books during the bulk of her career focused on that, but because her scope seemed to be getting to the similarities in our lives. We all have families. They all are both our strength, and also the cause of our greatest hurts.

This, for me, is not a great book, but a good one. It’s one last hug, or, like a bedtime story — one more quick tale, and then, no, seriously, you’re going to sleep. We stay with this story for a while, like Aileen stays a while with her ugly cat in the epilogue, and then we set it aside. Stories like DWJ’s will remain a cherished place to visit. If you want a book that is a brilliant example of DWJ’s art, for me, that’s Fire and Hemlock – and I’ll enjoy reading that through again this year.