Sisters can be the best — and the absolute, hands-down WORST.

Most of us who have sisters experience this dichotomy – the most literal “if you know, you know,” ever. Once summer, my two older sisters feuded so badly that my parents – in some weird pre-Dr. Phil-enhanced parenting move – decided to put all three of us into one bedroom to [battle it out] learn to get along. (SIDE NOTE: Who does that? Who finds three kids fighting worse than badgers in a sack and thinks, “Oh, I know, I’ll take away their private spaces so there’s never a time out!”) I think my Mom put a sign reading “Ward J” on the door – a la “One Flew Over the Cuckoo’s Nest” Juvenile Edition, and there we were for the whole of one very long, very stressful June, July, and August. I cannot tell you how happy I was to get back to school that year. 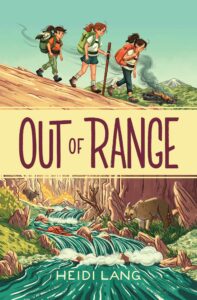 The turmoil that sends the three McBee girls into the woods to fix, in their mother’s words, what is broken between them, is a series of hurts made worse by poor decisions, time – and youngest sibling meddling. Fourteen-year-old Abby is working on becoming popular and losing sight of who she is, so much so that she’s willing to let her new “friends” badmouth her siblings. Twelve-year-old Emma, terribly anxious, leans on her other siblings heavily, wildly imaginative and afraid of wishing for certain things, or indulging in too strong of negative, dark feelings for fear that The Worst would happen. Like Emma, when my sisters screamed and exploded, they seemed… dangerous. Fearful me tried to water down their words. “Don’t say you hate that, say you dislike it…” I knew it was annoying, but as with the character of Emma, it was compulsive. I don’t think I’ve ever read of another character whose brain chemistry is so much like mine. (This would have been both terrifying and reassuring to read as a middle grader!)

Nine-year-old Ollie eggs on her middle sister and tattles to her eldest in an attempt to stay… in the middle of their fight. That way, connected to them, she’s not discounted, because even bad attention is still attention. Ollie has a long way to go toward becoming mature and determining who she is, but she knows she’s tough. She’s also impulsive and short-sighted, and often takes a bad situation, and makes it worse. Throw these three into the dangerous churn of the wilderness, getting lost, encountering all that is out there, and you have a high-stakes survival tale of conflicting personalities. By the end of the novel, the siblings remember that they love each other, though sometimes it’s a near thing. Maturing, they come into and out of closeness with each other, like orbiting planets, but still remain in the same solar system – which is, in the end, sometimes the best you can hope for.

This is truly one of the best books I’ve read this year, and I’ll be looking for it on the Awards lists next year.