We often talk about voice in novels, how it’s a difficult thing to pin down. I love reading a well-voiced character, and Maurice Broaddus gives writers a Master Class in how to voice the tenderhearted-but-tough/jaded-externally tween boy. I loved the quick back-and-forth of this character and his friends, the ridiculous insults they trade (“stanky butt” being prime) as well as the odd bestie slang and handshakes they concoct. It’s fun reading a real-life primer on friendships in a way that I didn’t experience them growing up, but which are so real they leap off the page. I can’t wait to see how Broaddus writes a female protagonist, and that’s apparently coming soon, so yay!

It’s hard to say what exactly I loved the best about this novel. It’s… charming is too small of a word, but the novel really is. The reader is immediately charmed by the smart-mouthed, world-weary, ironically honest voice of Thelonius Mitchell who, together with his sidekick, Nehemiah Caldwell, are middle-grade masterminds of mayhem — not criminal mayhem, mind you, they’ve got standards, but they are not above messing around and making trouble wherever they go. They’re already labeled as troublemakers and students with “issues,” so why not? School gets too boring otherwise. 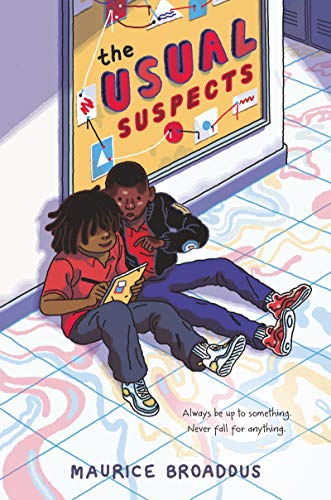 Persons Crossing Academy is a stand-in for a lot of public schools with a “plan” to “save our kids.” It’s filled with people who are tired, who had great ideas once, but lost their spark because it’s ground down in the reality that school isn’t the answer to saving kids, changing their home lives is the first step – and a step teachers have no control over, because they can’t change people’s financial realities, nor their access to the things which allow them to forget their financial problems. At Person’s Crossing, Special Ed isn’t used solely for students with educational needs, but behavioral issues are “warehoused” there as well. Students with poor impulse control and anger issues are welcomed to the Scream Room where they have to sit in perfect stillness for ten minutes in order to be considered back in “control.” There’s a population which has become the school’s underclass which has to be escorted everywhere, cannot be trusted, and, whenever things go down, they’re the usual suspects who are assumed to be guilty. Education – the dream for the American child to pull themselves up by their own boostraps, a feat which to this day remains impossible – is less about learning, and more about living down to the expectations of most. Only a few people in Thelonius’ life – his mother, one of the special ed teachers, and the new principal, surprisingly, see anything redemptive in a kid whose pranks are as big as his name.

But, when a gun shows up, hidden on campus, Thelonius realizes that playtime is over. If he doesn’t figure out whose gun that is, and where it came from, things are going to get a lot worse for a lot of kids whose only crime was being in the wrong class at the wrong school… Thelonius has been the instigator before now, but it might be time to change his play. It’s unfair how the Special Ed kids have been labeled and vilified. Maybe the only fairness at Person’s will be the fairness Thelonius makes for himself.

This novel part mystery, part growing-up story, and I loved it all.