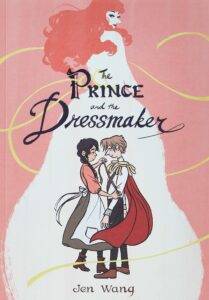 When I was young, I thought Boy George was a girl. He wore makeup and had long hair, ergo, he was a girl, because what else could he be. You might assume I was “too old” for that kind of confusion, but it simply hadn’t occurred to my wholly binary worldview that there were any deviations, crossovers, or shades of gray to be had with regard to gender ambivalence and expressions of masculinity and femininity. Even when I discovered a little more of the complexity of life, I was dubious. Was my sister SURE that her favorite pop band, Wham! was… okay? Wasn’t that one guy wearing makeup and an earring? Wasn’t that a problem someone somewhere was supposed to solve?

Thinking gently of that linear and bewildered young person and those like her, I opened the gorgeously illustrated The Prince and the Dressmaker. Graphic novels are always effective in easily getting me to swallow new concepts. We’re in space? Great. We’re in fin-de-siècle Paris? Fine. Bring on the story. A mischievous expression on a girl’s face, a little adventure, a lot of lace, and enchantment holds long enough to draw the reader through a story that models inclusiveness and affection, even though it comes in a way that the reader may never have experienced. Junior high me would have been an immediate, quiet fan. 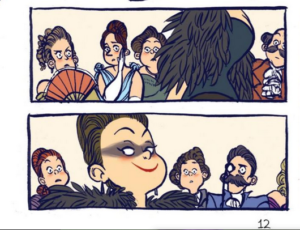 Once upon a time there was a dressmaker called Frances who wanted to make a name for herself. She got an opportunity she couldn’t pass up — to dress someone who wanted a dress to convey her personality, rather than what her mother wanted the royals to see. This young woman’s personality was harpy-esque – grubby, grabby, and deeply disinterested in marrying the prince.

The dress fit Frances created fit the wearer’s personality. I think the illustration of this brief vignette was one of the first panels where I laughed out loud. Look at that face!

Obviously, the customer is the person who has the money, not the person wearing the dress, and Frances got into trouble for her honest attempt to give a patron what they wanted. This misstep turned out to be a boon, however, as it got her distinguished attention… soon she was dressing Lady Crystallia, designing for the hottest icon in Paris. Unfortunately, nobody really knew that… because Frances couldn’t give up a friend’s secret in order to promote her own career. But because Lady Crystallia keeps her true identity a secret, Frances is forced to keep her talent a secret, too, which strains what was an easygoing and generous friendship. As Prince Sebastien grows happier with himself, and more confident in his alter ego, Frances also begins to grow as a designer, ultimately refusing to be rendered invisible. 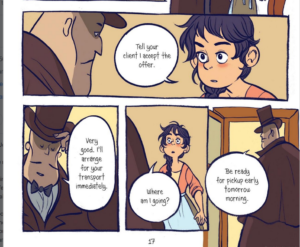 How these two friends worked out makes a lovely story which won all kinds of awards — A Washington Post Best Graphic Novel of 2018, A NPR Best Book of 2018, A Boston Globe Best Children’s Book of 2018, A Publishers Weekly Best Books of the Year, Joint winner of the 2018 Harvey Award for Best Children’s or Young Adult Book, and 2019 Children’s and Teen Choice Book Awards Teen Book of the Year — but what stands out for me aren’t the shiny stickers, but the lovingly rendered illustrations which call to mind the preciousness of friendship, the joy of a good floofy dress, and the unexpected satisfaction of navigating the world and supporting your friends’ hopes and dreams, but not allowing yours to take a backseat either. This is a new fairy tale in the spirit of a better version of Cinderella, and I’m a fan.