I don’t normally review romances and mysteries marketed to adults, because I find them the popcorn of books, I guess – you just shovel them down as a snack, but they’re not dinner. However, in the spirit of keeping track of those which stand out to me, I’m going to be briefly discussing those I like and why, so this is a less a review than a reader’s advisory. Here goes:

This novel is what would happen if you made the board game, Clue, a novel, and the chapter titles hearken very strongly to that game. The novel’s main conceit is that this couple, Hanna, the financier and Liza, the true crime podcaster, is on the verge of breaking up and over Easter weekend, Hanna tosses a lot of money into reservations at a very expensive hotel and informs Liza that they’re going away. This really annoys Liza, as she might have had other plans (she didn’t), but it’s clear the two have spent too much time apart chasing success, and now they hardly know each other. This weekend at a posh hotel – where there’s no cell coverage, incidentally – is meant to be the first step – or a last ditch effort – in repairing their marriage. 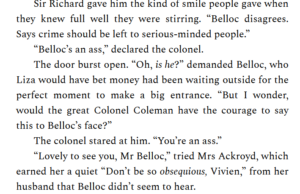 While Hanna and Liza’s struggling marriage isn’t played for laughs, the foibles of the others certainly are. This is an old-school great house which was made into a hotel, so everyone sits for the meal at one gigantic table… thus mixing social classes and characters. There’s a couple who bickers loudly behind closed doors, then enters the company with insincere smiles welded in place. There’s a bluff-and-hearty military type, a svelte-and-superior Sir Somebody, a nerdy Professor, a sexist Belgian who considers himself to be a master detective (shades of Poirot), and a femme fatale who is wholly a cliché, as well as the overworked and harried staff. The first night of the retreat, there’s a massive snowstorm. Hanna and Liza are trapped with their bickering – and with several deeply unpleasant couples. When the first person goes flying off a balcony to their death, it becomes apparent just how unpleasant.

Of course, there’s argument that the first death is an accident. Regardless, Liza is eager to investigate, and to a certain extent, every surviving guest (and the number drops precipitously) becomes an amateur sleuth as the novel continues – which directly leads to the next murder, of one of the sleuths. Liza’s on the case, but Hanna wants to barricade herself in safety, in their room, and is understandably furious and terrified that her wife, who ONLY HOSTS A TRUE CRIME PODCAST now thinks she knows how to solve murders. The thin veneer of “this is just a mystery I’m solving” unravels pretty quickly when Liza is struggling to process people she just spoke to being found dead. And yet, she and her wife are stuck, and the only way out is through – they have to figure out what on earth is going on.

For me this was a mostly successful novel; the over the top characters, the game parody, and the low-level sense of danger – “This will be over soon, someone with a snow plough will come along shortly!” – gave it all the classic sense of the trap being walked into. I did expect Liza to be more conscious of and have to work more against class and race issues that would cause others to react to her negatively. There’s some talk of this, but it’s Hanna in defensive mode, which didn’t strike me as wholly unreal, but Liza is constantly “let’s not make a scene”-ing her, which didn’t quite ring true. Having lived in the UK and been both stared at and condescended to about who I am and where I’m from, it’s difficult for me to imagine her just sweeping in to solve the murders without a lot more condescending pushback – though, she is English, which was probably to her advantage, so there’s that. Anyway, this was fun – more stressful than expected, with the “are we going to keep trying?” issue hanging over the characters’ heads weighed against “are we still going to be here to try?” but this was a fast, fun read, perfect for a long weekend and the last beach read of summer.