This is the last book in Meg Medina’s Merci trilogy, and it comes with a number of “last” things that nonetheless serve as springboards for What Comes Next. Readers don’t get a sense of things ending, so much as they get a sense of a new chapter beginning, both for the Suárez family collectively, and for Merci personally, in this well-written conclusion to the series.

As we’ve learned, Merci Suárez hasn’t ever really been a fan of change, and this year, there’s nothing but changes on deck. Roli, her super-smart brother, is back from University for a semester… to work at the local drugstore, and attend community college. While he’s brilliant, it’s not enough to make his scholarship money last forever. Meri is glad to have him back, but he’s understandably sad and a little resentful that his friends are all off on their own adventures while he’s back home, sharing a room with his little sister once again. 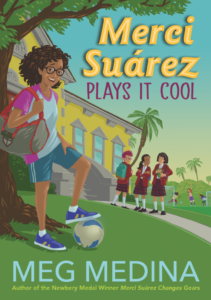 Merci’s grandfather, Lolo, is also losing more of himself to dementia. His wandering away from home and becoming lost for hours at a time becomes an added stress of time and funds to a family already doing extra hustling to make ends meet. Merci is also missing her Lolo’s wise counsel and encouragement, but sometimes he doesn’t even recognize her. It’s something she doesn’t like to think about, but eventually, the situation becomes unavoidable.

Heaped atop the considerable family drama, there’s school drama, too. Eighth grade friendships are challenging, and Merci feels like she’s being pulled between her soccer buds and her other friends. And then, the friendship that she cherished with Wilson becomes even more important, in ways that are a bit unnerving. On a long-anticipated class trip, things come to a head in a way that combines so many of the changes going on in Merci’s life at once that things fall apart – mostly Merci. It’s tough, and Merci is left with the realization that some changes are here to stay … forever.

Without going into detail this whole novel is about what lasts, what shifts, and what remains the same in life, and in friendships as we grow. Meg Medina carefully walks the reader through the ways we grieve our growth and its attendant losses, and how we move forward into new things. There is the usual offbeat Merci viewpoint, but we also see her deliberately taking steps to move herself, and observe the movement of others through the family’s losses and changes. There will be some tears, but in the end, Merci y la familia Suárez will land on her feet, stronger than before.

This was an excellent end to this funny growing-up trilogy, and I truly enjoyed this last peek at the world through this irrepressible eighth-grade Cuban-American girl’s eyes. I think you will, too.