I read page after page on the two big symptoms of Mom’s illness, mania and depression. Sometimes I could match myself to the mania stuff, like, talking very fast and jumping from one idea to another and being easily distracted. I could even go for being restless and having trouble sleeping.

Didn’t everybody have times when they talked fast and thought fast and got distracted? Was I the only person in the world who got bored and fidgety in class, or sometimes when I didn’t have things to do in the afternoon?

– from FOOTER DAVIS PROBABLY IS CRAZY, by Susan Vaught

“Like its heroine, this contemporary mystery is compelling, offbeat, and fearless.” —The Horn Book 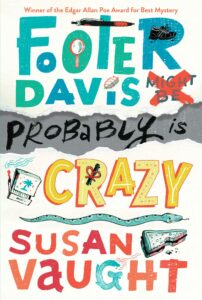 Books featuring characters with mental health challenges seem to fall into one of two problematic camps. In one camp, the challenge is centered as the biggest plot point, and the catalyst of all lesser choices, and two, the person without the challenge is often centered as the greatest sufferer. Problem novels, or novels which center a health challenge causing greater suffering to the surrounding family, rather than the person living with the challenge, can be ‘othering’ and distance readers from an experience of greater understanding of mental health. This is why I approached FOOTER DAVIS PROBABLY IS CRAZY, the 2014 Edgar Award winner, with wariness. The use of the word ‘crazy’ in the title wasn’t my favorite, but Footer is blunt, and from a small town in the South, and “crazy” goes with “bless your heart” and is heard all the time. Footer’s mother is one of the “crazies” and she’s the one who gets all the heart blessing – which Footer rightfully sees as obnoxious.

Footer – Fontana – has got a lot going on – she’s nosy, and she’s eleven. She’s working on becoming a journalist with her bestie, Peavine, so she conducts frequent interviews, and asks lots of questions, especially about a recent fire that happened on the next farm over. At school, she’s trying vainly to please her teachers, but it’s mostly not working, because she’s very distractable, and apt to go off on things like walruses (which she hates) and serial killers (which she’s learning to identify, for the purposes of early detection and escape), or doodle in the margins about something only tangentially related. All of this is a source of concern to the adults around her, and Footer she’s hoping she hasn’t inherited her mother’s mental health problems. This is unfortunately framed as the worst thing that could happen to her. It is eventually adequately shown throughout the narrative that “crazy” is not the absolute worst – after all, you could be evil, and an abuser – but I think this point is unfortunately muffled by the riveting mystery plot.

Throughout her mother’s dangerous behavior surrounding her snake fears, her subsequent hospitalization, and Footer being assigned a social worker, she continues to take risks and investigate. When Footer’s investigation gets out of hand, her mental state continues to be a source of dread that ramps up an already admirably tense plot. Footer becomes, in her own eyes, more and more erratic. Food is missing or being left around the house, she dreams of eating, and has wakened standing in the middle of the kitchen with food out. The final straw is when her father father stops believing the things she says, and tells her she hasn’t any idea what the truth is at all. This both infuriates her and breaks her heart, and reflects the way her mother is treated by the well-meaning in the community — her word and her concerns are shunted aside, she gets the “bless your heart” treatment, and is entirely ignored. But Footer knows she’s telling the truth, as she knows it, about something… what’s it going to take to get people to listen?

I bought this for the nephews who are now mystery mad, in the wake of a family mystery night. As we have family who are have mental health challenges, I want to begin getting them books which reflect a world where this occurs. I’m hoping it will make a space for them to ask the questions they’d like to voice, and for them to use the resources in the back of the book to do a little online research if they don’t want to say anything. Footer is an anxious, list-making reader, which is points on her side, but I’m still torn about this book, mainly because my experience of bipolar doesn’t match it. However, I know there’s no one-size-fits-anything experience of mental health, and I’m glad to find something that doesn’t wholly make health challenges a problem. Is this damning the book with faint praise? I don’t know – I’d love to see what anyone else thinks of this.