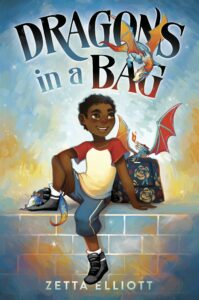 I don’t know how long it would’ve taken me to check out this book if it weren’t for the cover. One of my upcoming titles has cover art by the same artist, so her very recognizable style pops out at me. This book is a chapter book for the 7-10 year old crowd – well below middle grade – and I thought the subject matter would skew younger than I normally read, so I made note of it, but didn’t pick it up. I’m very familiar with the author’s work – but I slept on this one, which was definitely a poor choice. This book is utterly delightful. I mean that sincerely – and apologetically, if my tone is befuddled and surprised. I don’t have a lot of expectation of the awesomeness of books for the very young who are just learning to read independently. Silly of me, really – I know Zetta Elliott’s work, and since when does she ever bore readers?

It’s not often that writers of color get to write fantasy without it being a.) a lightly browned version of the acceptable and traditional British-defined Arthurian-style high fantasy stuff, complete with dungeons and castles and “fair maidens,” or b.) an Africanized version of Arthurian-style high fantasy stuff, complete with lions and tribal kings, face paint, drums, and …Scar, or somebody appropriately villainous. Not that there’s anything wrong with either of these options, but rarely do you find writers of color rewriting fantasy tropes altogether and setting them in Flatbush or somewhere in the Bronx. Daniel José Older and a couple of other writers are the only ones I’ve read who have done something unique and urban-fantasy like this, but they and many others tend generally to write for older readers. Enter this book – and a nine-year-old boy whose small family of slender means is on the cusp of being kicked out of their apartment. Enter a grudging family friend babysitting him – a family friend he’s not even sure is related to him or not, and one he’s never heard of before. Enter a package jumping around on her kitchen table, and a squirrel… trying to open up the window?! 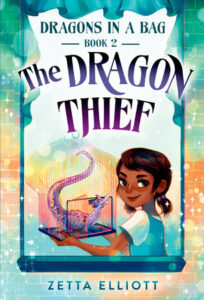 The twister is coming, and the Kansas landscape is whirling away…

I love how much this book turns the mere idea of fantasy completely upside down. I love that it’s fresh and original. I love that the regular denizens of the deep city environment – the homeless folk, the pigeons, the squirrels and the parks – are all given parts to play in the mysterious movements of the magicians of this fantastic landscape. I aspire to this kind of writing – of taking the known and the familiar and turning it completely inside-out, leaving the reader looking around at the humdrum neighborhood that is a familiar as the back of their hand and thinking, “What am I missing about here?” I cannot imagine that there aren’t hundreds of wide-eyed and innocent hearted kids out there now imagining whole new worlds behind the shuttered blinds and twilight gates of the city around them.

I also appreciate that this book left a nice opening for a sequel without it being obvious or problematic -leaving a cliffhanger – which one never really does with a chapter book anyway. The winsome and matter-of-fact little thief in book 2 will have her hands full, and I’m sure readers eagerly swallowed down her adventure. A delightful exploration of magic – that thing you thought you already knew. Well done, Zetta.