True story, KING AND THE DRAGONFLIES (which I have, for some reason, insisted on calling Kacen and the Fireflies) scared me. Scared me so much that some moments I had to put it down. It is an intersection of fear – a big brother’s sudden death, the rural Black South, homophobia and white supremacists. You just know, with that collection of things, that NOTHING good is going to happen. Nothing. And yet…the writing is hauntingly beautiful, King’s brother Khalid’s dreams, which he narrates via talking in his sleep and King writes down, are these luminous, exquisite, stream-of-consciousness poetic things. There is life amidst the rising heat and damp and the draping moss in the bayou, there is light, and titanium-bonded friendship and love, and – hope. This book is a Boston Globe-Horn Book Award winner, a CSK Honor Winner plus winner of the National Book Award, and all for a very good reason. It was wait-listed at our local library, even a year from release. 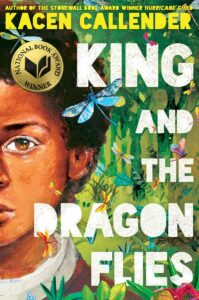 Kingston’s brother, Khalid, the one he looked up to and thought he’d be just like, the one he obeyed without question, even when it hurt – Khalid died abruptly one day, just …died. It’s been a horrible year, as the family grieves, and King hears his father – the one who told him that “boys don’t cry” weep until he’s shocked he has any more water left in him. Even Mikey, the sheriff’s son and a real scary racist who used to beat Khalid up is… sorry, and kind of says so. But King… doesn’t grieve, not the same way. He believes his brother is still around, that he’s shed his skin and gone onto be the next thing – a dragonfly. King goes to the bayou every day to watch them, wondering which one his brother is, or if he’s already flown on.

Khalid’s instructions to King to ditch his best friend, Sandy, because Sandy is gay and “you wouldn’t want anyone to think you’re gay, would you?” return to trouble King when Sandy goes missing. When you deliberately walk away from someone who you really like, and then have a year of loss, it’s difficult to hold on to the “rules” of what you should do. King is conflicted — and that conflict begins to take him deeper, until everything he thinks he knows is unraveled. What if King is gay? Would that be the end of the world? Would his father, who is trying to learn the words “I love you” swallow them down again? Would his mother, whose smile has been brittle and plastic this past year, never smile again? And what about Sandy? Will it ever be safe to be friends – or anything

Believe it or not, this book has… a realistically happy ending. An ending that is both unexpected and …satisfying, tangible, and not pulled out of a hat. Kacen Callender, you are an amazing being. This is a Masterclass on how to breathe emotion and realism into a novel for young readers in a way that respects them as creatures of heart and magic and humanity, though they are still young.