Raymond is feeling… awkward. His father is on tour with his band and thinks his son needs some “time” (and to not be such a follower after the last kerfluffle he and his best friend Trixy got into), so he’s been shipped off to Maine to visit his grandparents… Grandparents he doesn’t really remember, because they’re his mother’s parents, and his mother left them all years and years ago. Unfortunately, first because he’s his mother’s child, and secondly because his grandparents have gotten opinions about him from the trouble his friend led him into, they’re convinced he’s troubled and socially backwards. His grandmother sets up playdates for him, sending him to ride bikes and swim when he’s never learned to do either. After a sneaky ‘joke,’ played on him, the neighbor is convinced he steals. 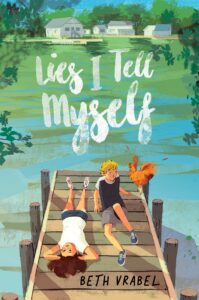 This is a tough summer for Raymond, but he is a boy with a plan. He’s not going to be defeated. He’s going to learn to ride a bike, learn to swim, and make a friend. Not necessarily on his agenda but happening anyway is his learning his grandparents. Raymond is an observer, and his wry, wise voice carries the novel into the quiet depths of his inner mind as he finds himself searching for echoes of his mother in her childhood home. She ran away from her parents when she was a kid, to find a country singer. That singer was Raymond’s father – but what was she running to when she left them? Her leaving has taken up most of Raymond’s elementary school years, and soon he’s going to be starting middle school. As Raymond pokes around his grandparents’ old house, trying to find remnants of the past and help it settle his present, he discovers his Grandpop’s journal.

The journal is a smokescreen. Though longing to connect with his family, the journal instead offers talk about a big life doing big things, never looking back, and never admitting mistakes. Eventually Raymond realizes that’s… not really what his Grandpop’s life was about. You can say anything you want in your journal, but the people you leave behind know you – and hold the truth. Never looking back doesn’t mean you live a life with no regrets.

Despite his belief that he lies to himself to get by, in real life, Raymond doesn’t have time for lies. In the end, the truth about everyone – including his mother – turns out to serve him better than he could have expected. Though this book have been sad, it’s instead triumphant, because Raymond learns his heart is stronger than he thinks. I’d have loved to read this as a middle grader.